This story was the inspiration for Moonbird’s Travel Lesson #4 – Take Your Destiny Into Your Own Hands and Seize the Unexpected Opportunities. It begins in Queenstown, New Zealand.

Actually… that’s not true. It begins in Los Angeles when we were planning our ten year anniversary trip. One of our really good friends from Australia had recommended we look into a helicopter ride.  He said there was one that not only lands on a glacier, but also goes to Milford Sound, one of the fjords in southern New Zealand. After we checked it out, this became the number one thing we wanted to do. I’d dreamt of seeing a real fjord and a glacier since I was a kid. The thought of being able to both in the same day… WHAT?! When Jolene saw some of the videos, she also got really excited, and as always, was 100% on board for the adventure.

Number two on our list was seeing Hobbiton in person. That was another incredible experience, and you can read all about it here.  But let’s get back to the glacier!

After looking into the different companies that offered helicopter rides, we chose Glacier Southern Lakes Helicopters. I liked their website, they had several different options for tours, and their customer service was friendly and kind. We looked at the different options, and chose the ride that started in Queenstown. First it flies to the top of a glacier.  Once there, you get out and actually walk around for a bit. Then it’s on to Milford Sound, where you board a boat cruise of the fjord, and afterwards, the helicopter takes you back to Queenstown.  Amazing!

We knew that this kind of excursion might be a little expensive, but it was our ten year anniversary, and we wanted to do something really special, so we budgeted for it and then paid it off a couple of months before we left.  I often talk about how important that aspect of travel is.  Budgeting and planning ahead so you can pay things off before you go is a wonderful way to feel free and clear when you’re on your trip. It’s also why it’s one of my most important travel tips. You can read more about it in the post “Moonbird’s Awesome Top 50 Travel Tips,” or listen to podcast episode number two!

A few months later… off we went!

For the first part of our anniversary trip, we spent six days in Sydney, Australia.  Then we headed over to New Zealand.  We made a video of the whole extravaganza, which you read about and watch right here.  Because we planned it so well, 99.9% of our vacation went off without a hitch. Both of us being experienced travelers helped of course, but it was smooth sailing for almost two weeks. Right up until the end of the trip where we had excitedly placed our helicopter adventure.  Save the best for last, right?

We were in Queenstown, staying at this really awesome Airbnb up in the hills. It was very romantic. I called the helicopter company the night before to confirm our reservation, thinking everything was good to go, and they informed me that a weather front was moving in.  It was possible that they wouldn’t be able to make the flight we’d booked. They told me to check in first thing in the a.m.

Jolene said not to worry, and that no matter what, we’d figure it out. I got a bit stressed because it was something I’d been looking forward to so much.  However, the reality was, there was really nothing to do until the morning, so we enjoyed another wonderful night on vacation and went to sleep. I set an alarm and called the company first thing as instructed. There was too much fog and heavy cloud cover.  Our flight was canceled.

This was the final piece of our entire anniversary trip, something we’d been looking forward to for months, and now we were not only going to miss the helicopter ride, but that was also our transportation to Milford Sound.  Both things seemed out of reach.

I want to acknowledge that I understand in the big picture of life, these are first world problems. However, it doesn’t change the fact that when you’re living these moments, they still feel how they feel, and that’s okay, as long as you keep perspective.

So what were we to do?  We had two days left in New Zealand and the one thing we’d been looking forward to and planned for the most, looked like it wasn’t going to happen. Instead of panicking and letting the negative feelings win, we quickly reset and began looking at our options.

Jolene and I are an amazing team in situations like this. We know what each other’s strengths are, and we know how to quickly assess what things are available to make the best “life recipe” out of the ingredients on hand.  We’re basically “Chopped” stars of life.  🙂

I called the helicopter company back and asked them if they were going to be flying the next day. They said if the weather cleared up they would, and we could absolutely transfer our tickets to that day. There was no guarantee, however, so it was a risk. We could stay another day in Queenstown, find something fun to do, and effectively wait around to see if we could take the flight the next day. But if they didn’t fly… we were not only going to the miss the glacier, but we were also going to miss the fjord. It was a risk I didn’t want to take. So I had an idea…

Thankfully, it was very early in the morning, around 6 AM.  I looked up the website for the boat tours at Milford Sound. I knew the fjord was about a four hour drive away, and from what my Australian friend had told us, it was actually one of the most beautiful drives you could take on the southern islands.  I looked up the route, information on that exact drive that other people had made, and then jumped up off then bed and excitedly said to Jolene, “I’m taking my destiny into my own hands! Let’s hop in the car, make the four hour drive down to Milford Sound, hop on the longer boat cruise, then drive back to Queenstown tonight, and if the helicopter is still flying tomorrow, we can switch to a longer glacier tour they told me about, and skip going to Milford Sound again.”

“Are you sure?!” she said excitedly.

“Yes! Are you down for a crazy last-minute road trip through Southern New Zealand?!”

She smiled this one particular smile of hers that I truly love. It always means, “You bet your sweet butt I’m down!”

We literally grabbed our backpacks and began shoving things in them that we knew we’d need. Camera gear, snacks, warm weather clothing, etc. I purchased the boat tickets online while she started loading the car. Within 10 minutes we were on the road, GPS programmed and maps at the ready, and heading off on another adventure! I called the helicopter company and told them what we were doing. I asked them to book us on a longer glacier trip for the next day and that I’d call again in the morning to confirm.

Over the next four hours we got to see some of the most beautiful countryside and winding mountain roads that I’ve ever been on in my life. My friend hadn’t exaggerated in the slightest. We stopped at some fun places and took pictures, we had some yummy food, and we enjoyed a spectacular unexpected and spontaneous road trip! 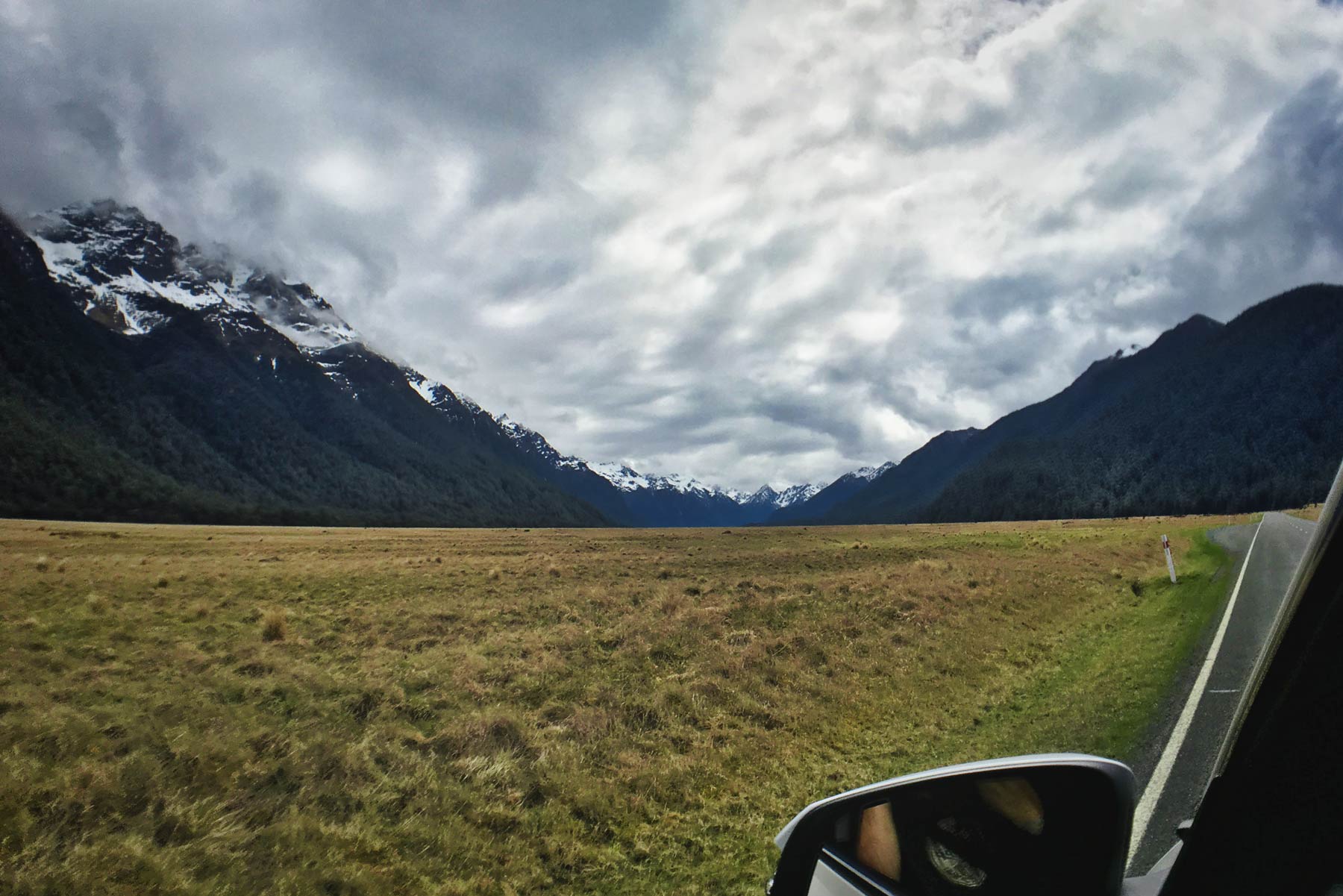 The view from the road, looking towards the mountains of Fiordland National Park, New Zealand

The actual drive into the fjord is one of the most beautiful things I’ve ever seen. It was the shoulder season, so the weather was cold but not bitter.  The cloud cover was beautiful, and rolling across the mountains.  And there on those winding mountain roads, at some point… I really had to pee.

However, there was nowhere to pull off.

It’s a two lane road that’s somewhat close quarters and there is no place to stop for quite a ways.  Thankfully, Jolene was driving and this wasn’t the first time that there was a urine situation on an adventure, so I hopped into the backseat and grabbed an empty water bottle. She started laughing because she was trying to keep the car steady, but as I said, the roads were very curvy.  It was a scene out of a movie as I said things like, “Would you hold it steady?! This bottle has a small opening and I have to aim carefully!” To her credit, she’s an excellent driver. I was successful in relieving myself, but it took a substantially longer amount of time than I would’ve preferred with a lot of stop and start because of the roads.  It was another crazy, fun moment we’ll remember forever.

We arrived in Milford Sound with over an hour to spare, had some snacks, shot some video, and got very excited about our boat cruise. Another awesome bonus of the spontaneity of our road trip, was that the original boat cruise we’d booked with the helicopter company was only an hour. The boat cruise we booked (with Southern Discoveries) by driving there ourselves, was two hours!

We got on board the boat and then spent the next two hours seeing some of the most spectacular scenery I have actually ever laid my eyes on. I can’t express with words just how stunning Milford Sound actually is, and while the video is nice, it really doesn’t do the full panoramic experience justice. If you’re ever in New Zealand, it should absolutely be on your list of must-see destinations. 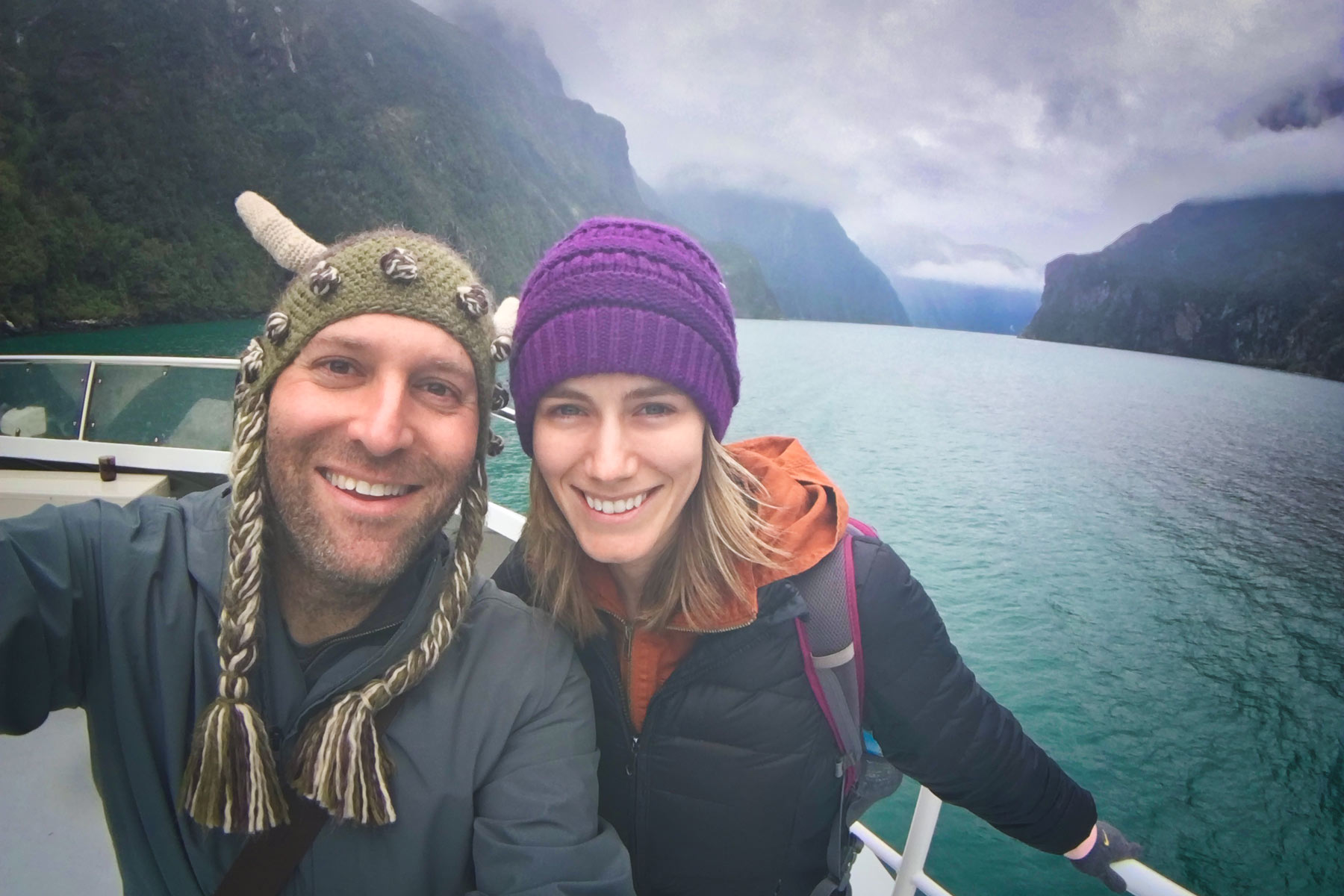 We returned to Queenstown that night and got some rest.  The next morning, Glacier Southern Lakes actually called me before I even had the chance to call them, to tell us the good news that the helicopters were flying! We made our way to the airport and after safety training, climbed into our helicopter. Then we were whisked off to a real glacier!

The other exciting thing, and good fortune that came our way, was that much like the boat cruise, in switching the helicopter flight from the original plan to only a glacier flight, we got a longer helicopter ride and more time on the glacier. By breaking up these two trips we ended up really winning on both sides.

The point of me telling this whole story is that when you’re traveling, sometimes you run into snags or snafus, the proverbial bumps in the road and best laid plans. To navigate those moments successfully means understanding the quote, “When fate shuts a door, come in through the window.”  That idea, that sometimes you have to find an alternate way of doing what you want, can mean the difference between a great trip and a very disappointing one.

Now how about some video to celebrate taking our destiny into our own hands?  Please enjoy! 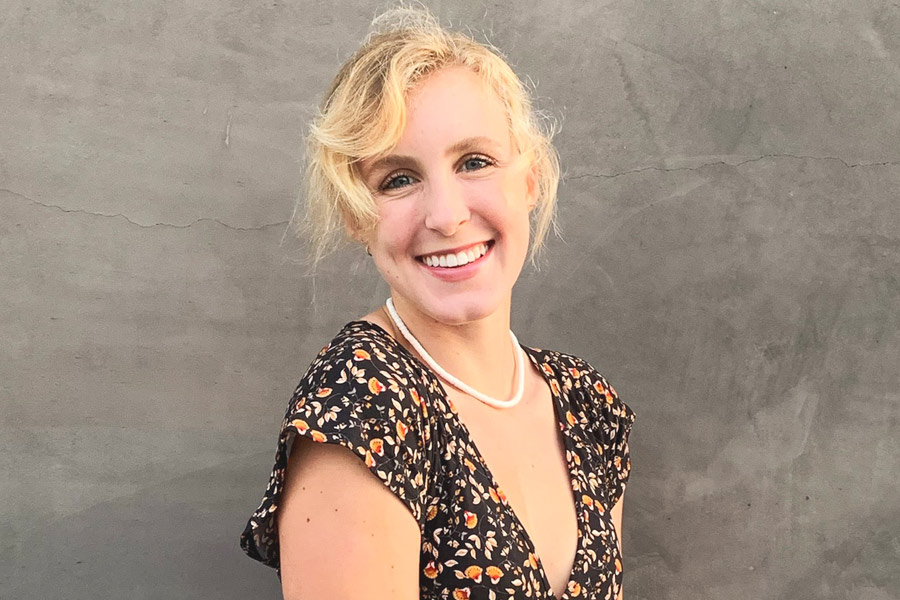