That’s one of the questions I get asked the most.

The question that often follows is, “Why is your logo a boy with a telescope?”

The logo question can be answered here.  The Moonbird question…

That’s a two part answer, and if you’d like, you can listen to episode one of the Memories of a Moonbird podcast right here where I talk all about this!

Part one:  There’s a real bird out there called B95.  He’s a beautiful subspecies of Red Knot, which is a part of the sandpiper family.  Here’s a photo of him: 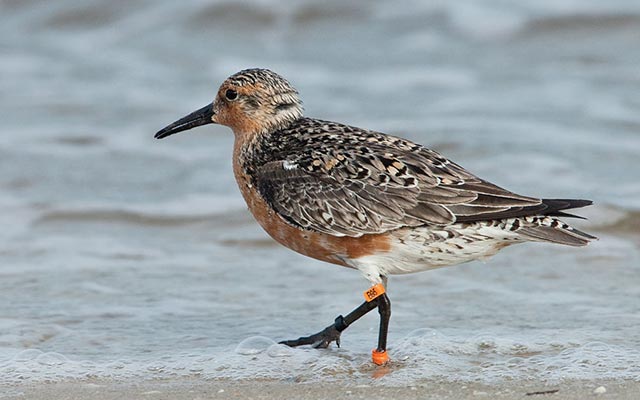 He’s called B95 because that’s the tag number scientists put on him to identify him.  B95 is not only the oldest known member of his species, but… he’s nicknamed “Moonbird” because he migrates about 20,000 miles (32,000 km) a year, and added up over his life, that distance exceeds the distance from the Earth to the Moon.

Part two:  Jolene knows more about animals than most people on the planet.  She’s been studying them since she was a child and one of our shared lifelong dreams is to host an animal show along the lines of David Attenborough and the BBC.  One day, she and I were talking about my travel experiences and all the places I’d been.  I’ve moved quite a bit over the years (more than thirty times), and she said, “You’ve traveled so much in your life, you’re like a Moonbird.”  I didn’t know what that was and she explained it to me.  I loved it and the nickname stuck.

I’d written out a decent list of adjectives and ideas that I wanted to incorporate into the name.  One of them was:

“I want to share so many of my amazing memories with people.”

I looked at those words and then said to myself, “Yeah.  The memories of a Moonbird.”

I called Jolene immediately and said excitedly, “I think I’ve got it!  What do you think of this?”

She loved it, and five minutes later, the domain name was registered.  🙂