That’s how I’d describe the Alton Rigg bike route at Drumlanrig Castle.  Before I explain why, show you some pictures, and tell you about meeting Thunder the beautiful horse, I’d like to tell you about the castle itself.  It’s located on a 120,000 acre estate, has parks and gardens, and is the home of the Duke and Duchess of Buccleuch.  It also hosts museum-worthy collections of silver, porcelain, French furniture, and art.

However, I can’t actually tell you about any of those things, because when we got there… the castle was closed.

This was a reminder of two of Moonbird’s Travel Lessons:  Lesson #2.1, “If someone else is picking the sightseeing location, make sure you’ve double checked the details,” and Lesson #4, “Take your destiny into your own hands and Seize the Unexpected Opportunities.”

Jolene had planned this portion of our Scotland tour because her Dad and Step-Mom were joining us.  In all the hustle and bustle of making plans, somehow the actual open hours of the castle were missed.  My mistake not to have had her back and double-checked the details.  We’re pretty great at Lesson #5, and Jolene had already looked into the variety of activities offered on the castle.  Biking was one of them, so…

There on the grounds is a bike shop, run by a man named, you guessed it, Rik.  Appropriately, it’s called Rik’s Bike Shed.  Rik is not only awesome, but looks like he belongs in a Wizard’s secret chamber where he’d wear long robes, carry a magical staff, and concoct all sorts of potions (and probably a little bit of trouble), but all with a smile on his face and a comforting laugh that makes you feel pretty happy, even if he may accidentally turn you into a newt.  Rik’s charm, and cool gray ponytail only adds to his charisma and kindness, and he was quick to help save the day, get the four of us setup with mountain bikes and helmets, and send us on our way.

Jolene chose the Alton Rigg path because it was long enough at 13km (8 miles) that with stops for photos and taking in the loveliness that is Scotland, we could be out all day, but back in time for dinner.  In short… castle closed?  No problem.  Take your destiny into your own hands and get on a bike to see the countryside! 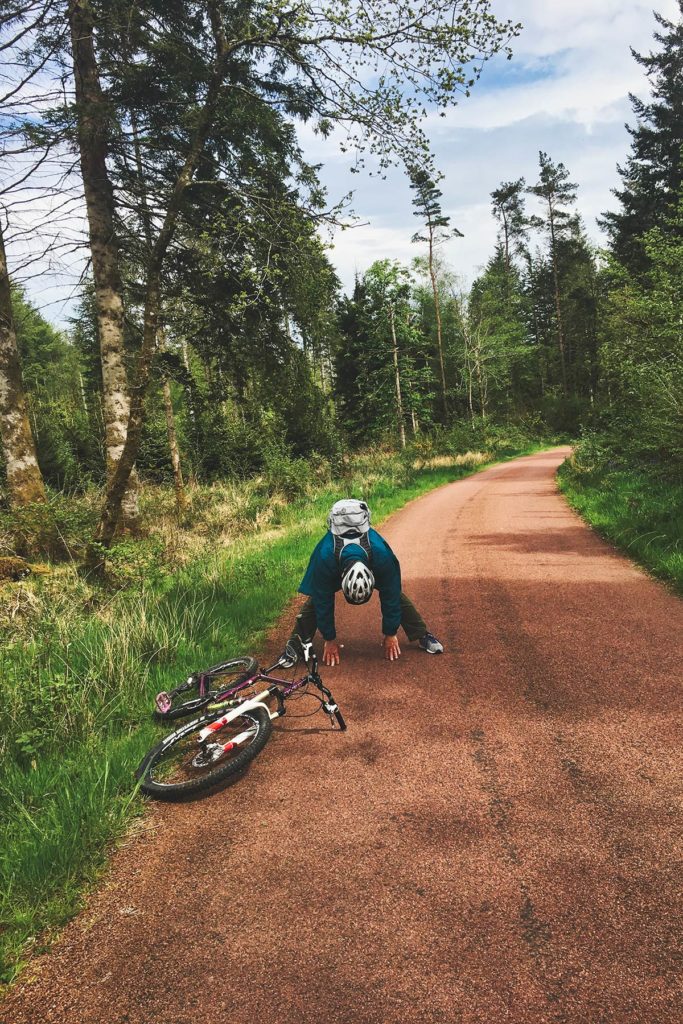 A good stretch before our ride

We settled into a comfortable pace and a few minutes down the path the scenery opened up to rolling green hills and peaceful sounds of nature.  We were there in the off season (hence the castle being closed), so the temperature was what I consider perfect.  Cold enough to wear a light jacket, but warm enough not to have to wear lots of layers.  The four of us rode for a while.  We’d stop to take photos and say hello to the sheep and cow that graced the sides of the path.  We laughed, talked about life, and then, when we least expected it, were greeted by Thunder.  Not the sky variety.

Thunder is a horse.  A beautiful horse.  And he was being ridden by a lovely woman named Eleanor.  We came upon them about half way through our journey, and since I used to ride and show when I was kid, we struck up a nice conversation.  Both she and Thunder were great and offered the warm, Scottish smile and openness we’d come to know wherever we went in the country. 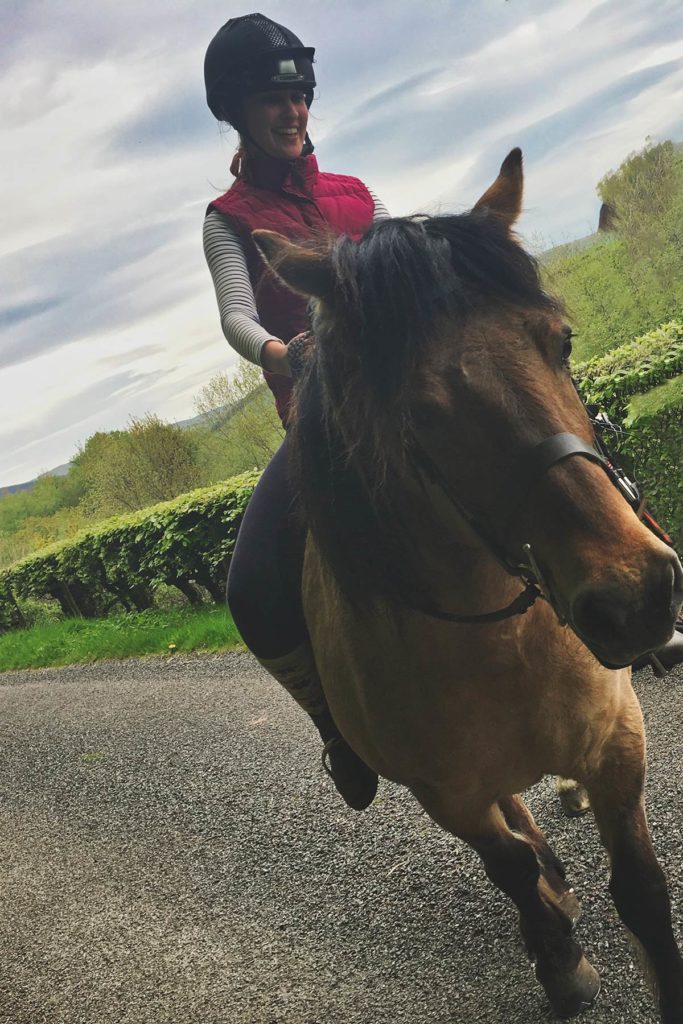 We said good-bye to them and went our merry way.  Ten minutes later, when we’d stopped to sight see, they strode up again.  Being off our bikes this time, Eleanor was kind enough to let us hang out with Thunder more.  That was one awesome horse.

The view wasn’t terrible either.

Eleanor, Thunder and the Scottish countryside

We thanked her once more and headed off.  About thirty minutes later, we were just past the center point of the whole journey, and had come upon an area Rik had told us about, the highest point in elevation on the whole ride.  He said the view would be gorgeous and expansive.  He wasn’t exaggerating.  Jolene and I decided to stop and get some drone footage.  We put our bikes to the side of the road, and I sat down and setup our little flying friend.

I was shooting for a good twenty minutes or so when, you guessed it, we heard the now familiar clickity-clack of horse hooves, and once again, Eleanor and Thunder had caught up to us.  We laughed and chatted again, “Fancy meeting you here,” etc., and I asked her if she wanted a drone shot of her and Thunder, which I’d happily e-mail her.  She said, “Sure!”

I had her ride forward a bit, lined up a shot, and with every good intention, thought I would fly past both of them with the grace of an eagle.  It was going to be an epic shot of her on her horse with the far reaching green lands of Scotland behind them.

A huge wind blew across the path, the drone turned askew for a second (which rarely happens, it was a REALLY strong wind), I tried to correct the direction, but Thunder didn’t like the drone, and he whinnied and took off like lightning.  Eleanor got control of him quickly (she’s a very talented rider), and we agreed Thunder wasn’t going to have his close up, thank you Mr. DeMille.  We thanked her and I apologized for spooking the horse.  She wasn’t worried about it and we eventually said our farewells and headed off in different directions.

We did get some amazing drone shots of the country side though.  🙂

After packing up the drone, we hopped back on our bikes for the downhill portion of the ride.  We grabbed our trusty gimbal and shot some awesome footage racing down the hill for a few miles back towards the castle. 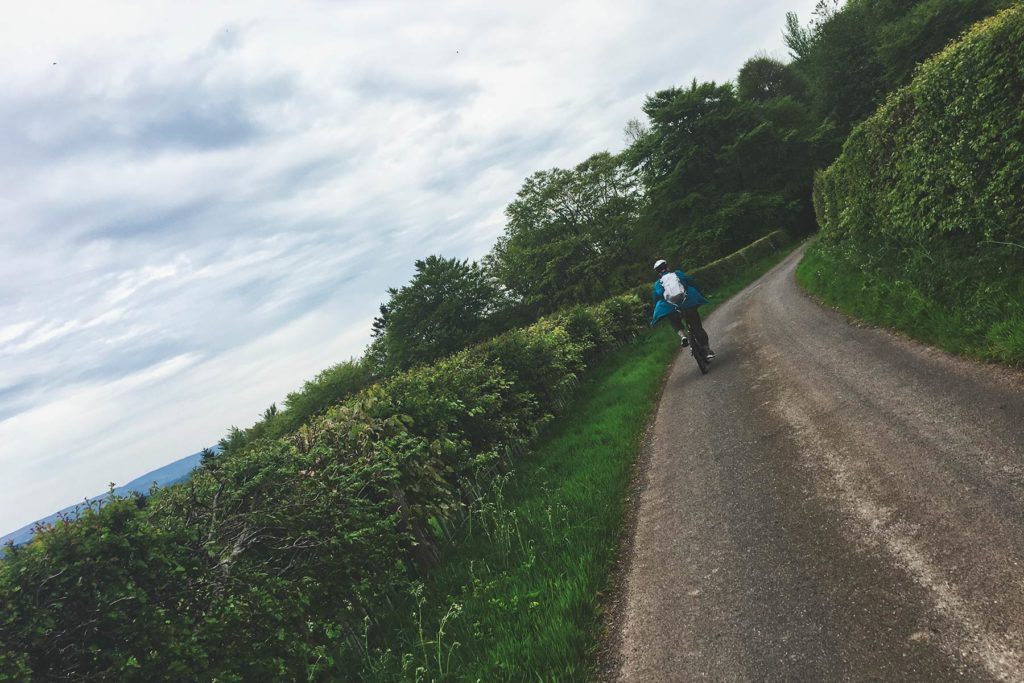 At some point, we took a wrong turn and ended up twenty minutes in the wrong direction.  Haha!  We eventually got back to Rik’s Bike Shop, and thanked him for an amazing ride and experience. 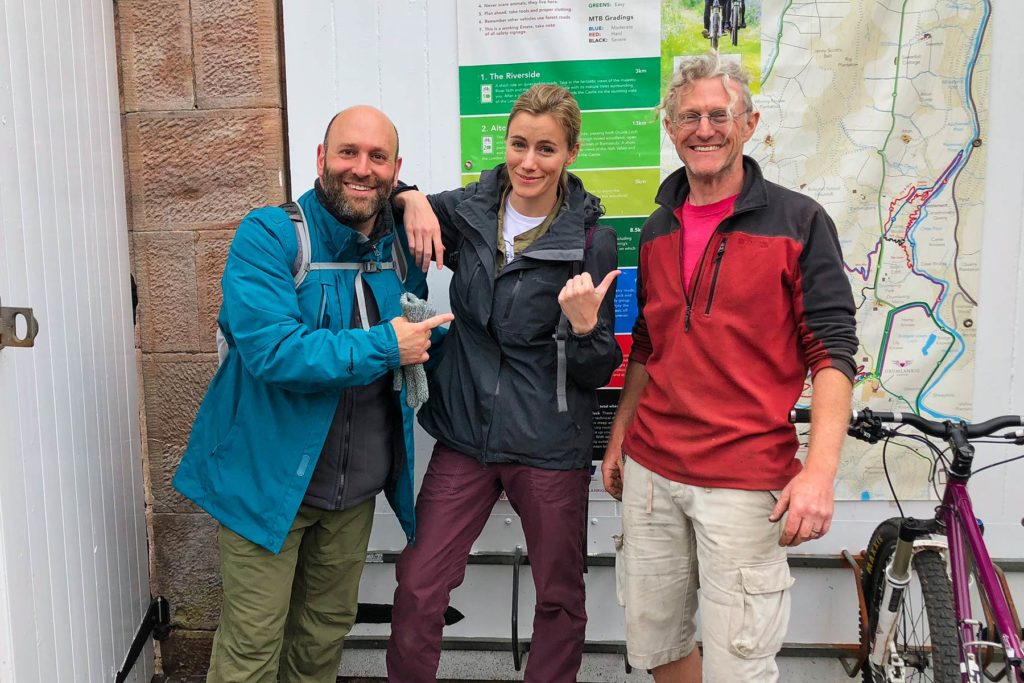 Me, Jolene and the awesome Rik 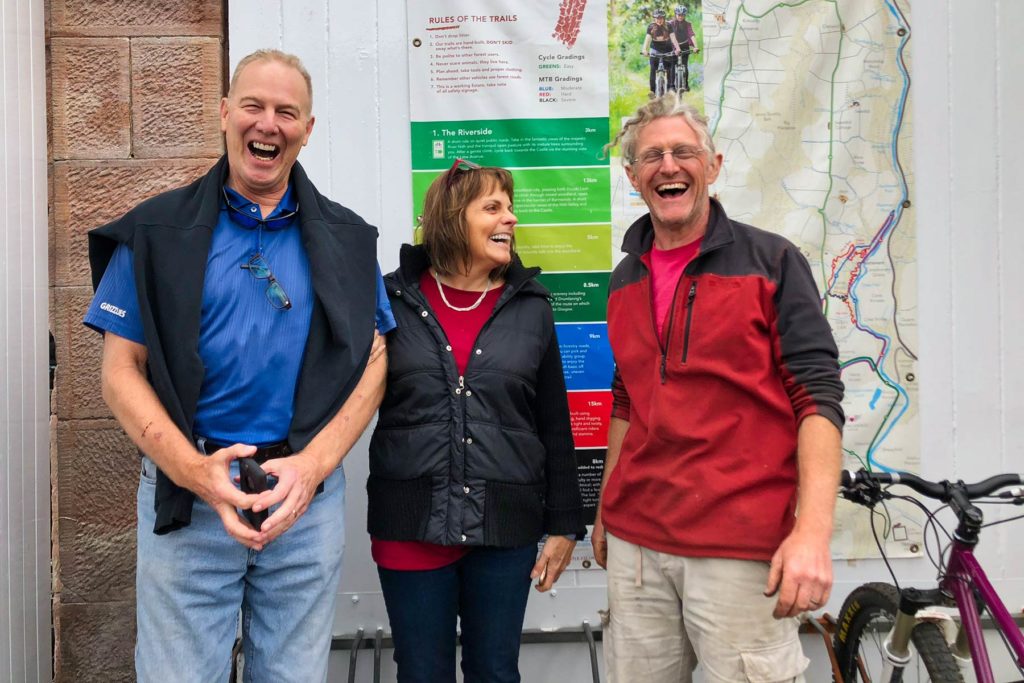 The video below will show you some of the highlights from this adventure, but the truth is that most of the best parts aren’t captured on camera because this was one of those experiences where you’re so busy enjoying it that you simply forget to take out your camera.

I can’t express how important those are in your travels.

It’s great to document your life and experiences, and of course, I’m a huge proponent of doing that.  However, I also believe that sometimes you have to just leave those things in your bag. It may sound cheesy, but in those moments, look out at the world, breathe the air, talk with the locals, and just take it all in without technology.

If you do, you never know when Thunder may come calling.

Guided tours start from 11am, with the last tour at 4pm (approx. 1 hour)