“All we have to decide is what to do with the time that is given us.”
― J.R.R. Tolkien, The Fellowship of the Ring

In all of my travels, Hobbiton stands out as one of the most magnificent things I’ve ever seen.  We went there as part of our ten year anniversary trip. I wrote a separate post about that, which you can read here. But why is it so magnificent? What about it makes it so special? From the outside, you might look at pictures and video clips of Hobbiton and think that it’s just another theme park attraction with long lines, annoying crowds, and an expected amount of cheesiness thrown in for good measure.

One of the things that sets it apart from all other tourist attractions in the world, is that this is a real place that exists on a real farm in an absolutely beautiful part of New Zealand. It’s one of the main reasons why when you’re there, you feel like you’re hanging out at a home you didn’t realize you yearned for.  And it’s a lot bigger than you think.  The village of Hobbiton is about 12 acres (5 hectares) in size, but that’s only the Hobbiton part.  The actual land surrounding Hobbiton, which is owned by the Alexander family, is a working livestock ranch consisting of 1,200 acres (500 hectares) of rolling grassland grazed by more than 13,000 sheep and 300 cattle.  To put that into perspective, the Disneyland Park in Southern California is 85 acres (35 hectares). That means that the entire farm that Hobbiton sits on is fourteen times bigger than Disneyland! This immense stretch of green as far as your eyes can see is part of the magic of the Shire.

The second factor that sets this place apart, is that almost everything you see is real. From the landscape, to the flowers, to the buildings, to the incredible Green Dragon Inn…  this is a real live working place with a full staff that maintain the beautiful gardens and landscape as well as the incredible food, music, and hospitality. You don’t ever have a feeling of people in costumes pretending to be something else. You feel like you’re actually walking around, living and breathing in middle earth. It is a fully immersive experience.  And one that no matter how many words I use I can’t seem to describe well enough. Which is why you should go see it for yourselves.

After reading about the different tours they offered, we decided to go for the “Evening Banquet Tour.”  It’s more expensive, but it’s also twice as long and you not only get to tour the shire just before sunset, but then you get to eat a FANTASTIC meal in the Green Dragon Inn and then walk around the Shire again at night… by lantern light.  It’s just… honest to God… remarkable.

Let’s talk about that food for a minute. The evening banquet tour is not some theme park cheap, garbage food. They have gourmet chefs and staff working to create truly excellent dishes that are reminiscent of what you would find in a fantastical environment such as this.  The meal is not only visually breathtaking but a glorious adventure of pleasure for the palate. These pictures don’t do it justice but here’s a glimpse: 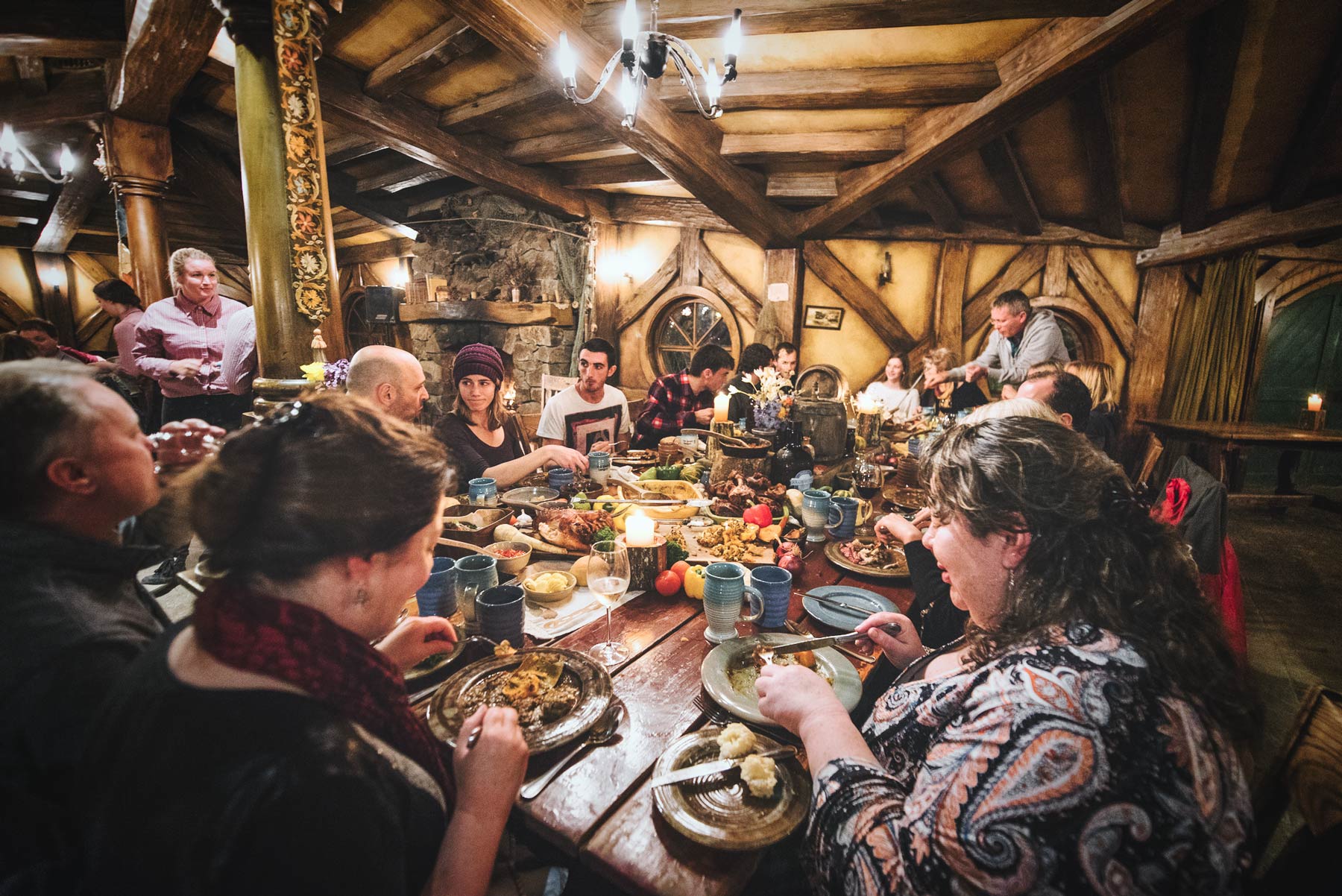 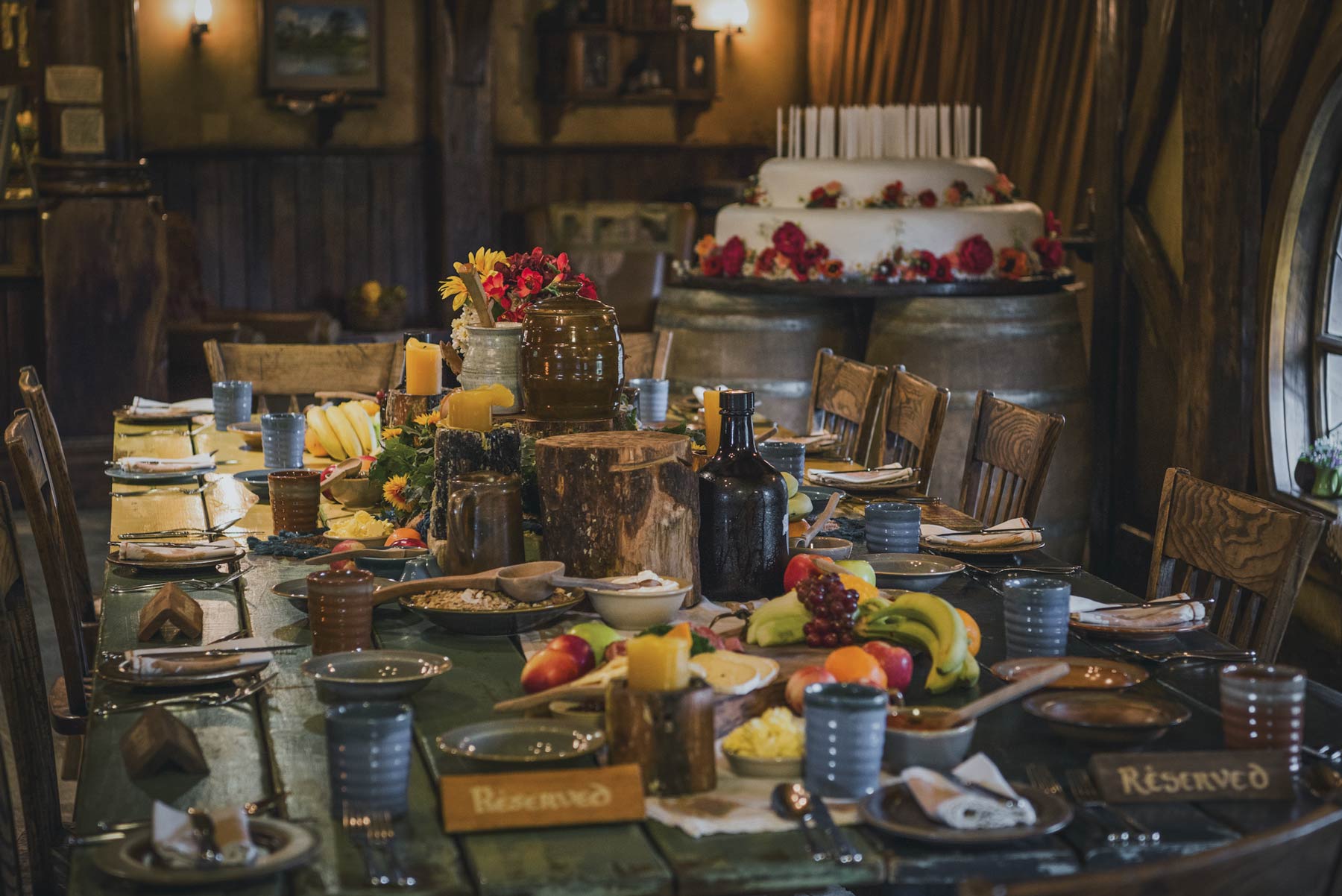 Amazing food is about to happen in this room. Hobbiton, Matamata, New Zealand

You can also see in these photographs, if you look at the background, the detail in all of the design. Every single inch of this entire place has been crafted by hand with a passion for detail and authenticity that I haven’t seen before. Here’s Jolene sitting in the lounge area of the inn having a drink before dinner. Just look at the craftsmanship: 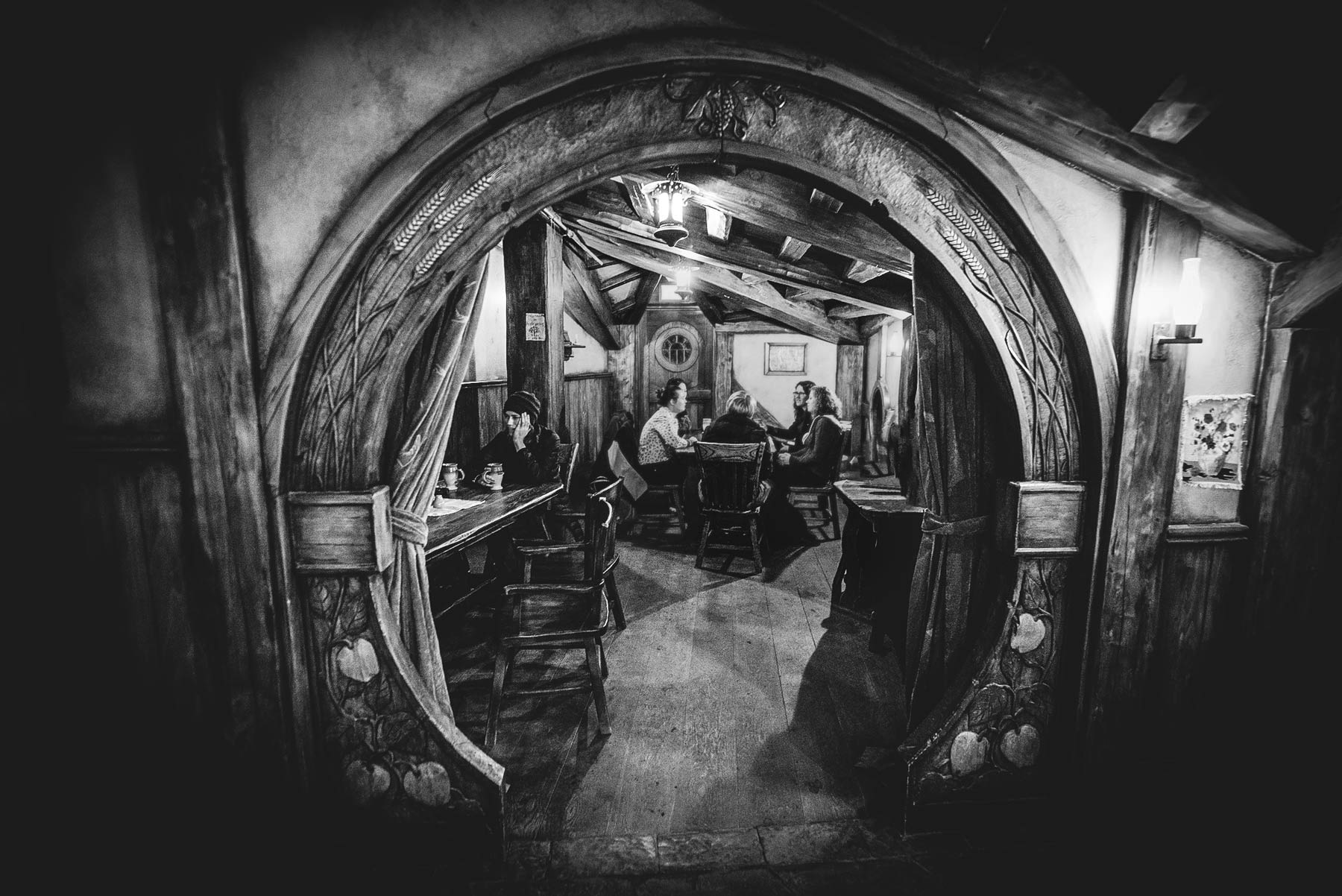 Jolene having a drink at the Green Dragon Inn. Hobbiton, Matamata, New Zealand

There are tons of small details in every corner that lend beautifully to the immersion. Things like this sign board: 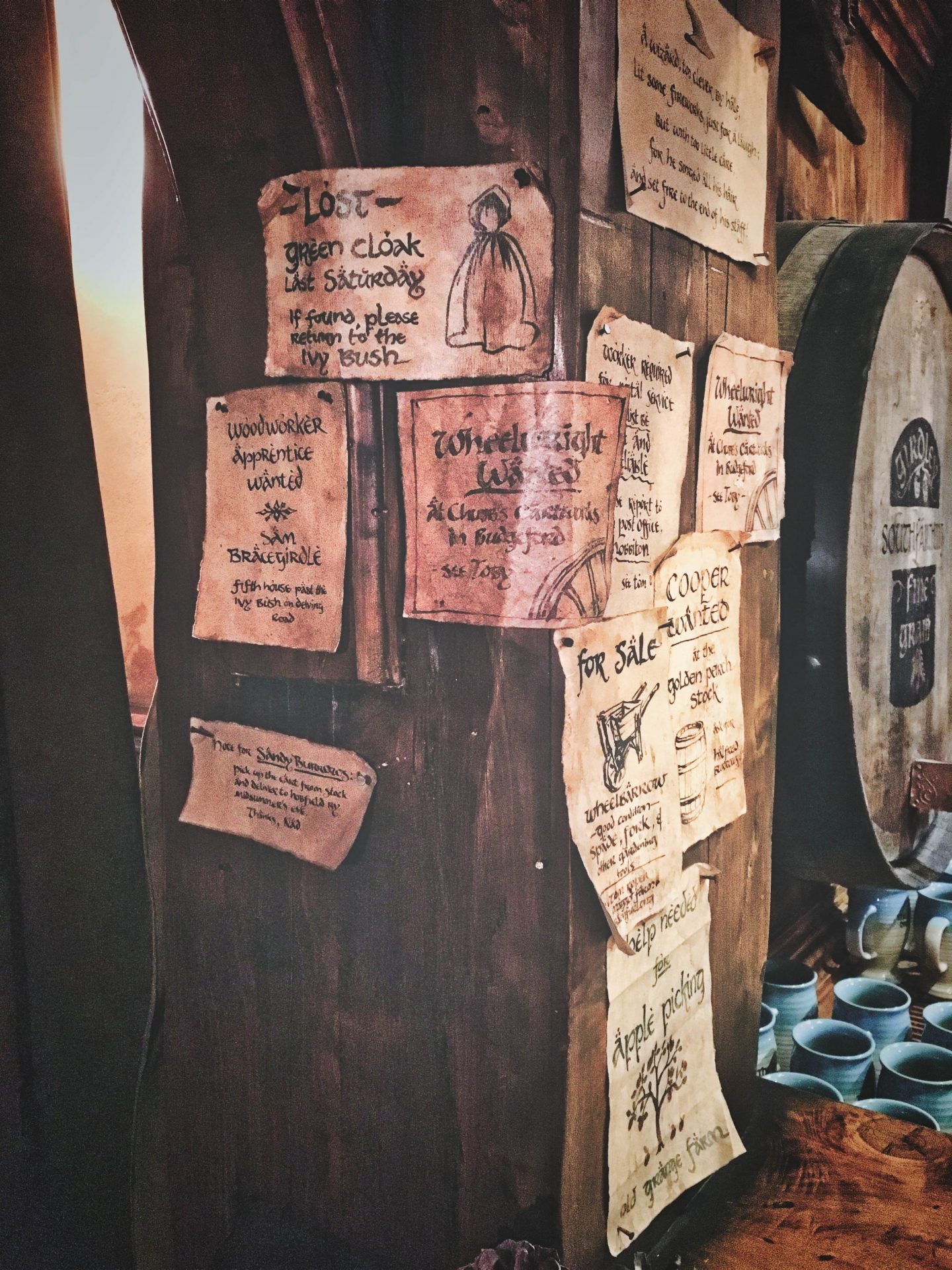 So is the place overrun with people? No. They are very smart about how they do the tours, running them frequently and in small groups. Additionally, the tour guides are not only well-versed in an epic level of Lord of the Rings and Hobbit trivia, but they all have a great sense of humor, and make the experience so much fun. We really felt like kids again, rich in imagination and fantasy, living in a world of happy make-believe.

The reason I’m glad we did the sunset tour, and I’m especially glad we were there in the off-season, is that as the sun began to set and the air got colder, the lights from all the Hobbit holes slowly came on, and live music from the Green Dragon Inn drifted over the entire place.  I looked out into the distance and taking the whole view in, felt a real sense of peace and serenity in the world. It just so happens that unbeknownst to me, Jolene took a picture while I was having this moment: 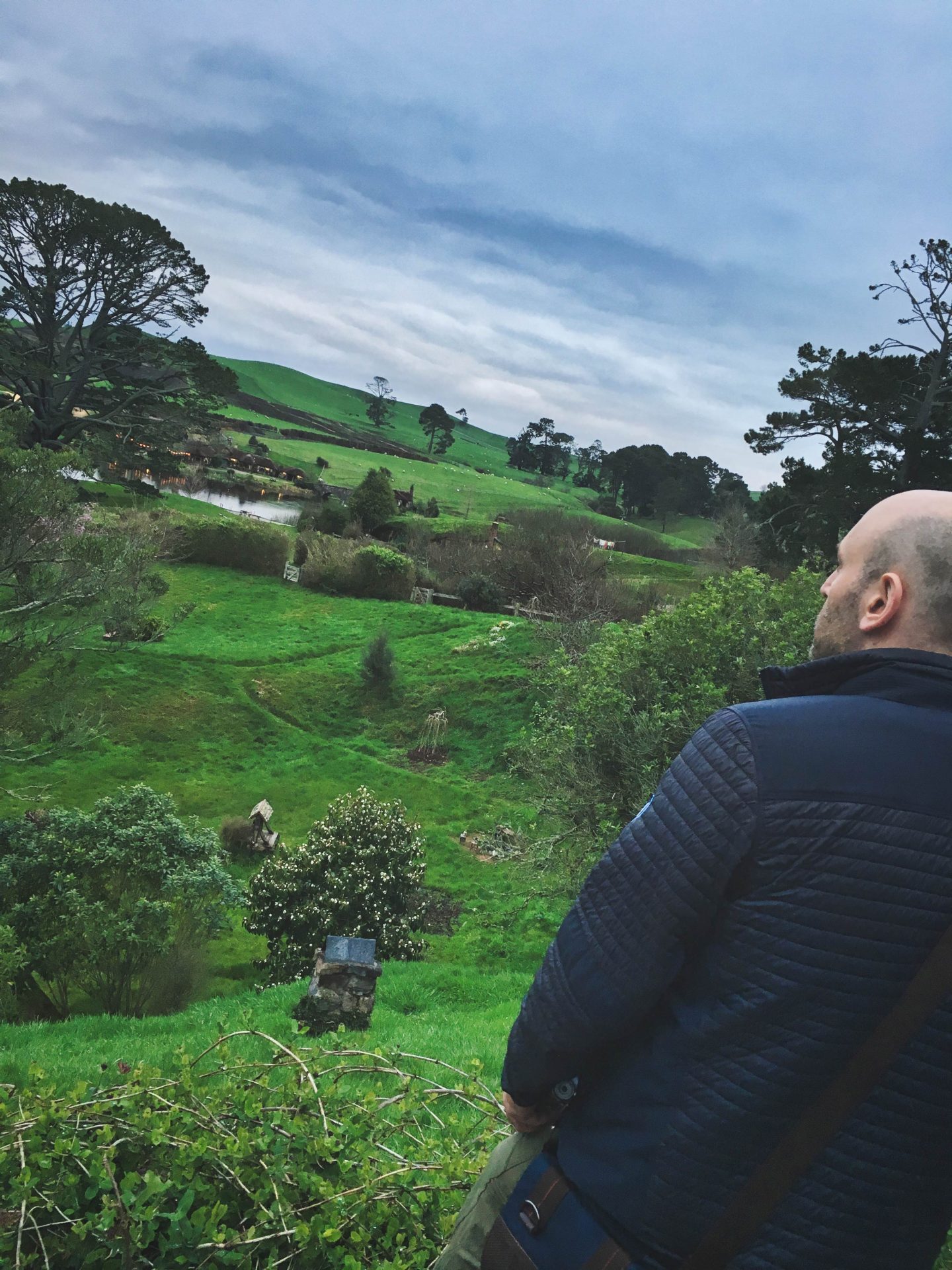 As the sun sets, the music from the Green Dragon Inn can be heard… Hobbiton, Matamata, New Zealand 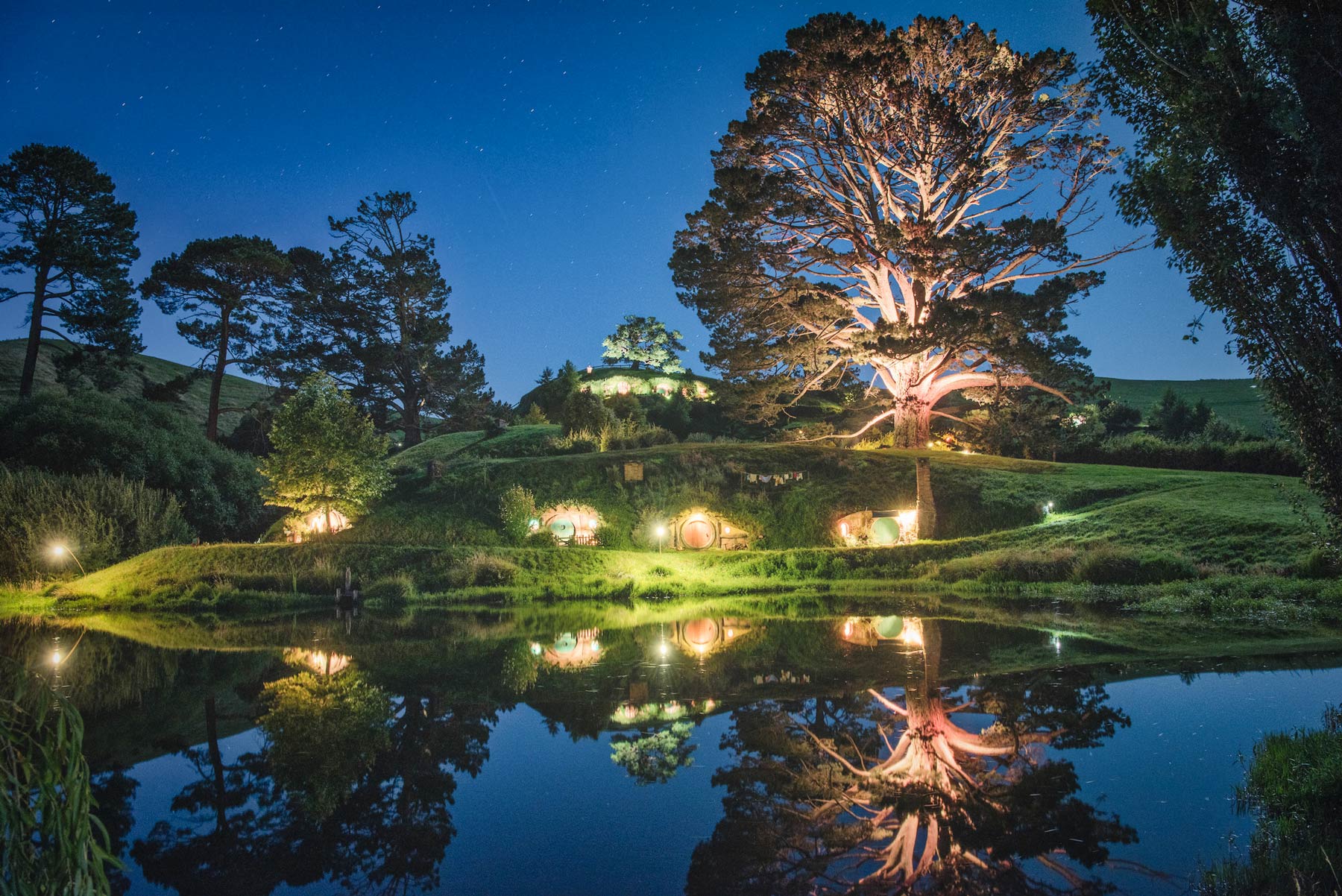 I created a whole photo gallery of Hobbiton, which you can see here. In addition, there’s some video in our anniversary highlight, which you can watch right here.

There are many stories I could share about our time there.  I could tell you what it’s like to walk by lantern light through this magical place.  I could tell you how it feels to dance after dinner to live violin and renaissance-like music. I could regale you with tales of being behind the bar at The Green Dragon Inn, feeling like an Innkeeper in a world like that of Dungeons and Dragons.

But the truth is… I’d rather you go experience it for yourselves.