It’s amazing what happens when you let go of control.

I know that philosophers and internet memes have been saying that for years, but when it comes to travel, it’s a paramount truth.  If you can embrace it, it leads to a much more enjoyable time traveling, and in your every day life.  That’s going to be the point of this post, in case you don’t want to read the whole thing.  🙂

Like my Mom, I am 100% a planner.  I believe wholeheartedly that having a good travel plan is the first step to travel greatness.  However, I also believe that being open to where the road takes you and letting the universe share its magic with you is the only way you ever go from a good experience… to a magnificent one.  Over the last decade I’ve visited death Valley four more times since the “sand dune incident” that I spoke about in my second Death Valley post.  I was there once for work and three times for pleasure.  The three pleasure trips were me taking Jolene there for a romantic couple’s adventure, the two of us taking my Dad there for a family adventure, and us taking our dear friends Aaron and Alexandria there for a spontaneous adventure. 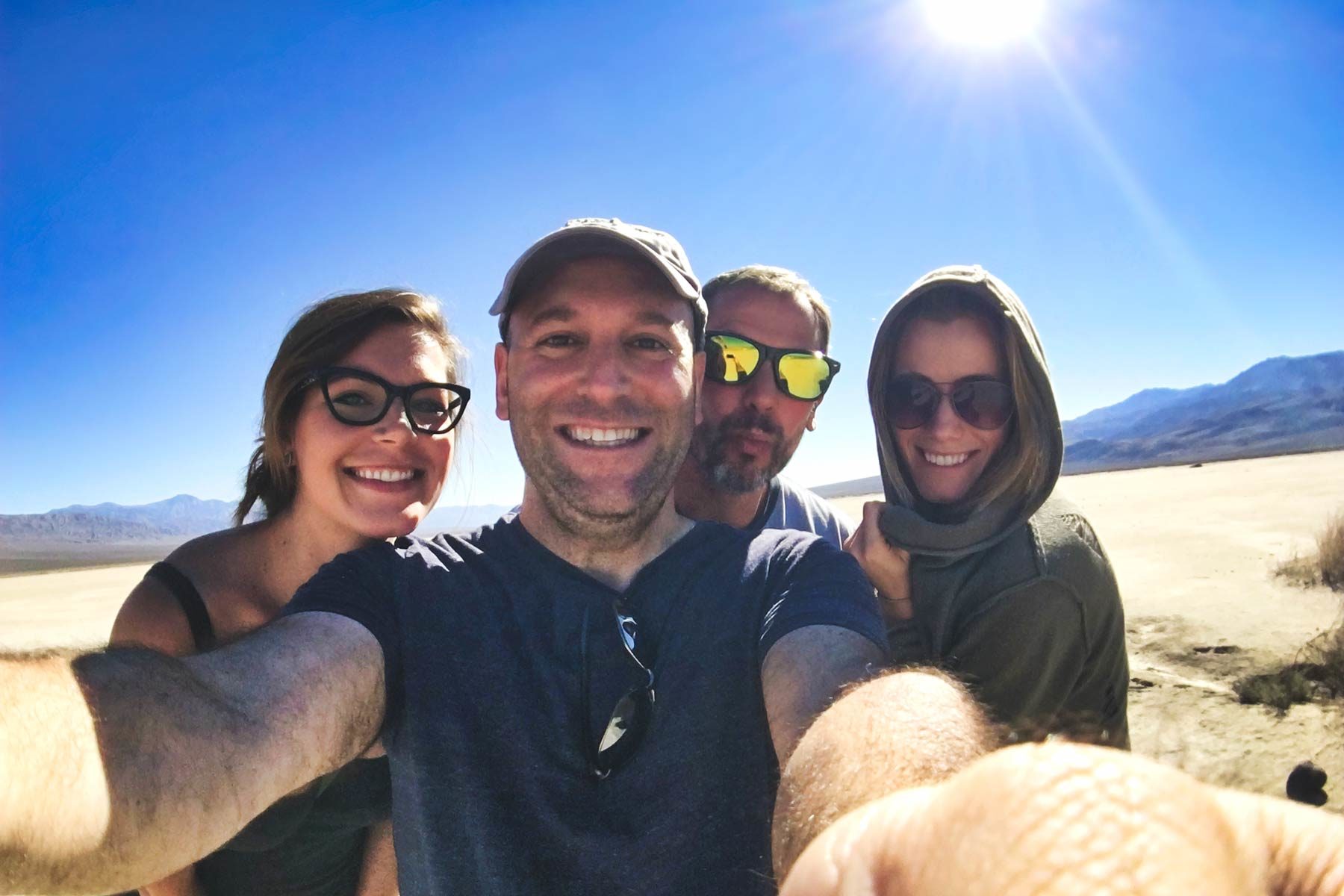 Our friends Alexandria and Aaron at the cracked earth flats

Our trip with Aaron and Alexandria was completely spontaneous.  When we’re together, it’s pretty much non-stop laughter and fun.  Aaron, being someone who also loves a good adventure, had asked us what we wanted to do over the days they were staying with us.  I casually mentioned that if they wanted to be crazy and go for a road trip, we could go to Death Valley.  I didn’t think they’d actually say yes, but Aaron asked to see my pictures from my previous trips.  I showed them, and then he locked eyes with me, and completely straight-faced, said, “Let’s go.”  That’s all the inspiration we usually need to do something fun with friends, so we hopped on-line, made a reservation for a room in the park, packed our overnight bags, and headed out early the next morning!

We saw many of the sites I’ve mentioned before, and the Badwater Basin video in my first Death Valley post was with them. We also introduced them to the glorious steak from the restaurant at Furnace Creek.  But the most unique moment we shared was our first night there. 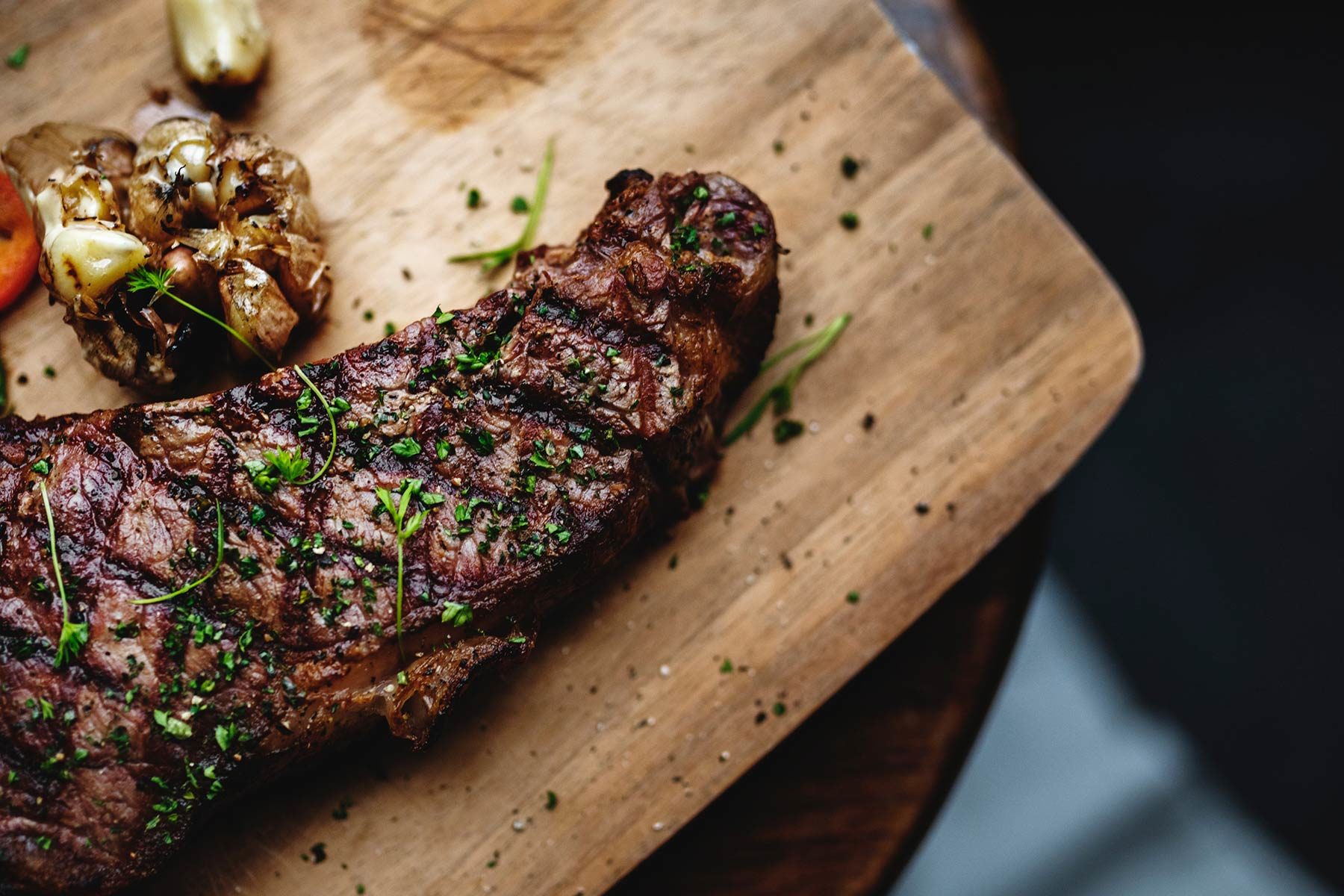 It was not only Halloween, but it was also the World Series.  They were very excited about that because their home team was competing.  It was a very odd and funny thing to witness, as most of the tourists were hanging out at the restaurant / bar in various costumes, but all of them were listening to or watching the game, and at the same time that the sun began to set, the local bats and wildlife began flying around.

I couldn’t make this stuff up, which is why I emphasize, let go of control and let the adventure unfold on its own.  That’s how you meet a desert fox.

There were two things we wanted to do.  One, get away from the lights of the Oasis to see the breadth of the desert stars, and two, Jolene recommended that we try to see if we could witness any more nocturnal wildlife.  We hopped in the car and drove for about ten minutes until we were out of sight of the Oasis.  In Death Valley, it doesn’t take long to be in the middle of nowhere.  We saw a place to pull off safely and did so.  We got out, shut off the car and let our eyes adjust to the darkness.  Not long after, we were treated to a view much like the one in this photo: 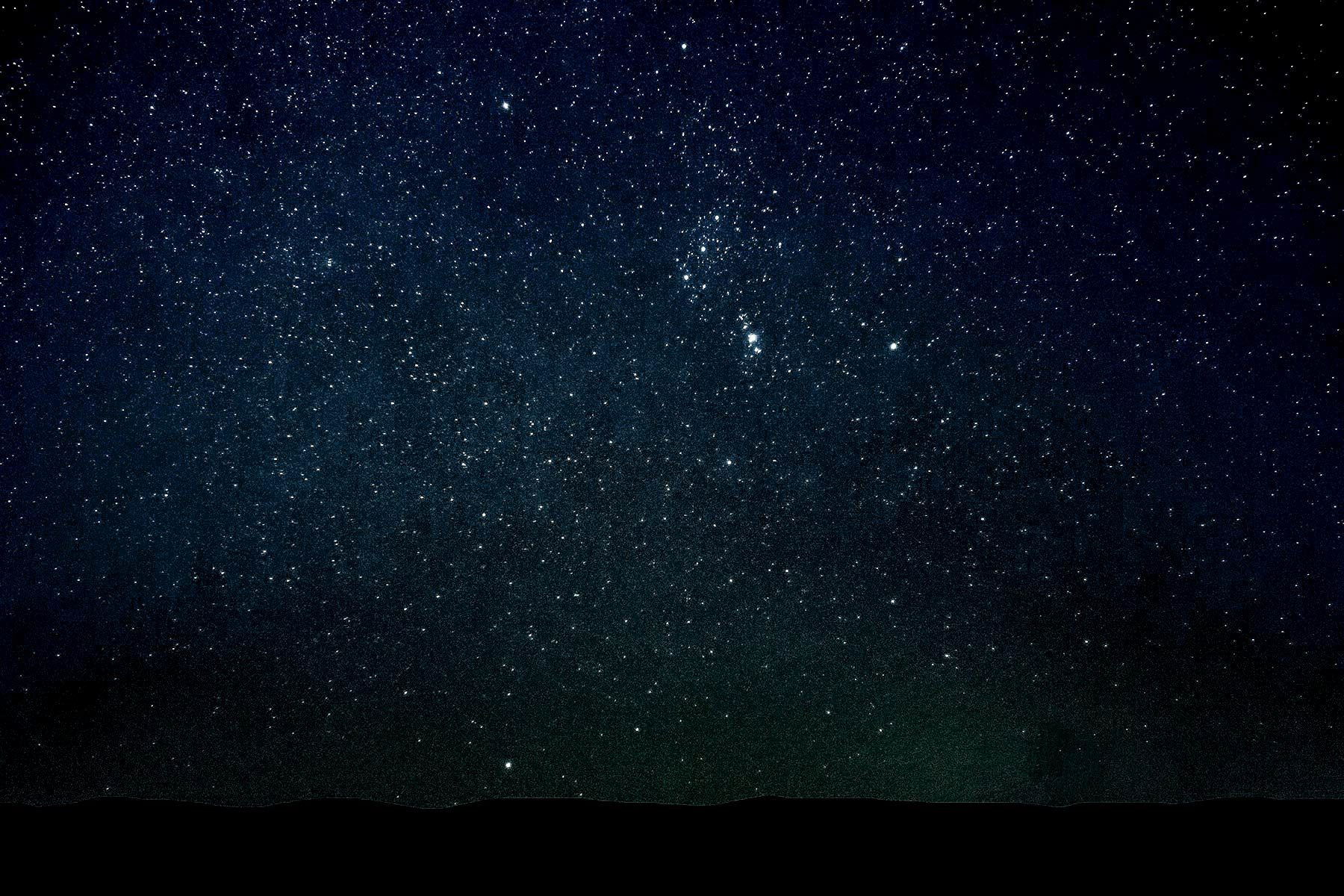 The stars in the desert at night

It was incredible.  I know people some times blabber on too much and with too much hyperbole, but it really was the Cosmos open before us in ways you don’t normally see.  We sat there looking up at quadrillions of stars the same way our ancestors have for millennia, and in that moment, it was hard not to feel at peace with all of life.  For me, at least, there’s a sense of grandeur to it all, and a belonging to something much greater than myself.

There, in the midst of that feeling, was when Jolene whispered, “Nobody move!”

We all looked at her and her eyes were razor-sharp focused on something in the darkness.  I should mention that amongst her many super powers, no joke, Jolene can spot wildlife better than ANY human being I have ever met.  I’m not exaggerating.  She would be the best tracker the galaxy has ever known.  She not only has an undying love for most creatures on our planet, but she can spot them with eyes and senses like a peregrine falcon.  We all knew that, so we sat, waiting, watching her, looking at the darkness… when she finally pointed and said quietly, “There!”

Sure enough… there next to a small bush, barely visible in the darkness, was a desert fox.

We sat still, watching, waiting, and wondering what it would do.  Jolene and I exchanged a glance, and said everything we needed to.  One of my super powers is that animals tend to like me.  I don’t know what it is, but they do.  Maybe they smell all the years of my Mom’s amazing cooking and think, “I’ll bet he would taste good.”  However, I’d like to believe they see something kind in me.  Regardless, often when we encounter wildlife, I’m able to approach them without them scurrying away.  I thought I’d give that a try this time.

I slowly walked towards the fox, not too close, but just enough to say hello.  I sat down on the ground and let it observe me.  It cocked its head to the side a couple of times, looked at the others, then at me again, and then… walked a little closer to us.  I carefully took out my iPhone and began taking pictures and filming.  It was tough to get a good shot because it was obviously quite dark.  I did manage to grab this one with a flash: 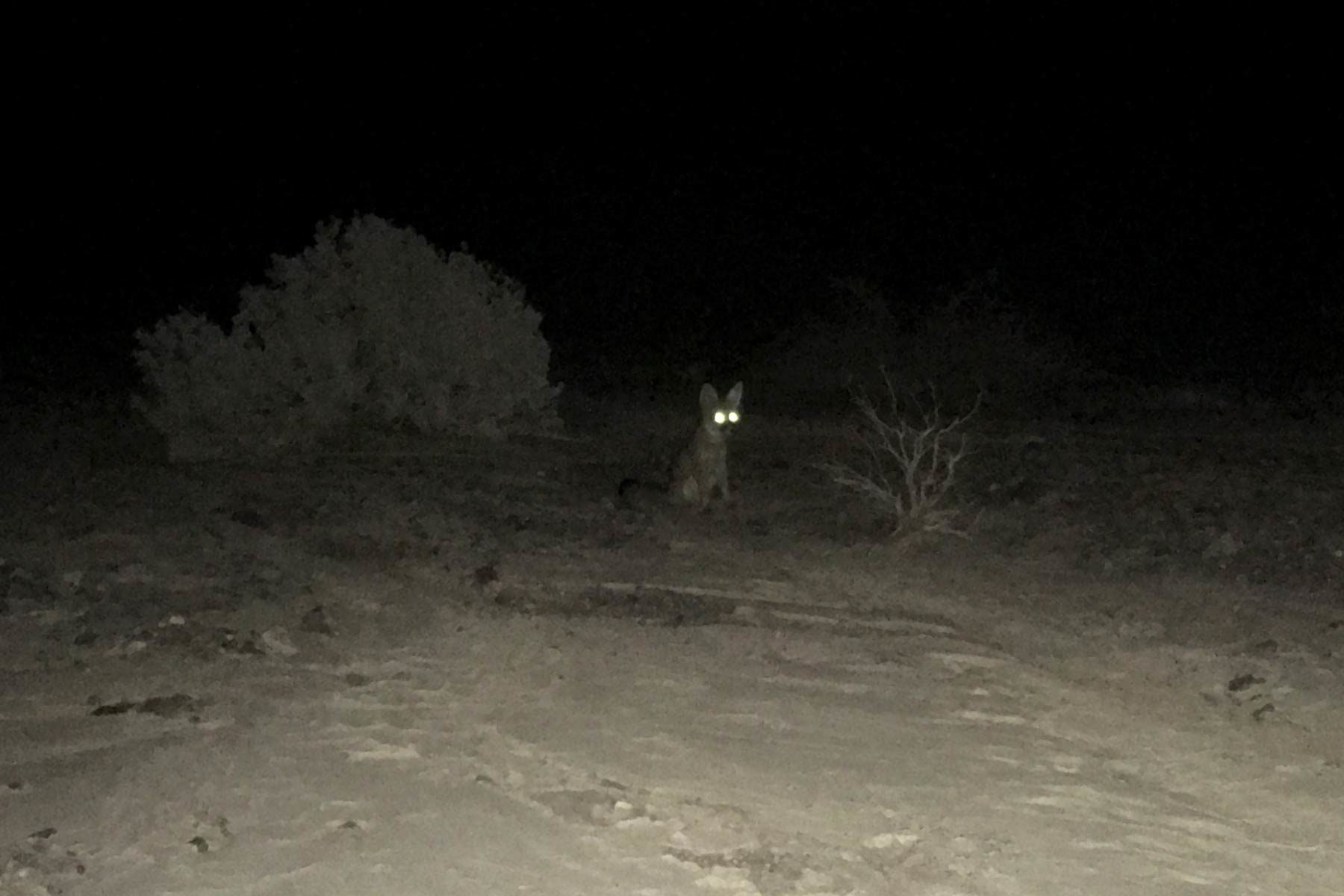 Then, something even more amazing happened!  The fox started running back and forth.  Then he’d stop to look at us, dig a hole, and look at us again.  It felt like he/she was saying, “Hey!  You want to play?!  Let’s dig holes together!”  And then it did that again.  It didn’t care that I got closer, and this went on for about twenty minutes.  We had so much fun watching this beautiful little creature in its native habitat.  At some point, as if the fox knew it was time to head to bed, it stood on top of a mound of dirt, looked at all of us, and then ran over to me.  It cocked its head at me for just a second, and then ran off into the desert.  I caught that last moment on my phone:

The entire experience was incredible.  The friends, the stars, the fox, the weather, the open desert… all of it.  As I stated at the beginning of this post, being open to where the road takes you and letting the universe share its magic with you is the only way you ever go from a good experience… to a magnificent one.  These are the things that make travel truly worthwhile.  They are the stories we retell for the rest of our lives and the memories we pass on to the next generation.

And they are very much a part of what makes life worth living.

Click on over to part four of my Death Valley series.  There you can read about our trip with my Dad and the snoring festival to end all others.