The Mona Lisa is actually famous because it was stolen.

Most people don’t know that fact.  For hundreds of years, while it was still one of many celebrated pieces of art, it didn’t stand out on its own.  However, all of that changed on August 21, 1911 when it was stolen from the Louvre by one of the employees, an Italian man who believed it belonged back in Italy.  The painting was eventually recovered.  It was returned to the Louvre on January 4, 1914, after a brief stay in the Uffizi Gallery (or Galleria degli Uffizi) in Florence, Italy.  Word spread globally about the theft (and subsequent return) and that’s when hordes began traveling to Paris to see it.

Today, the Mona Lisa is considered the most well-known painting in the world.  It’s visited by over six million people a year.

And I think we saw all of them when we were there.  😉 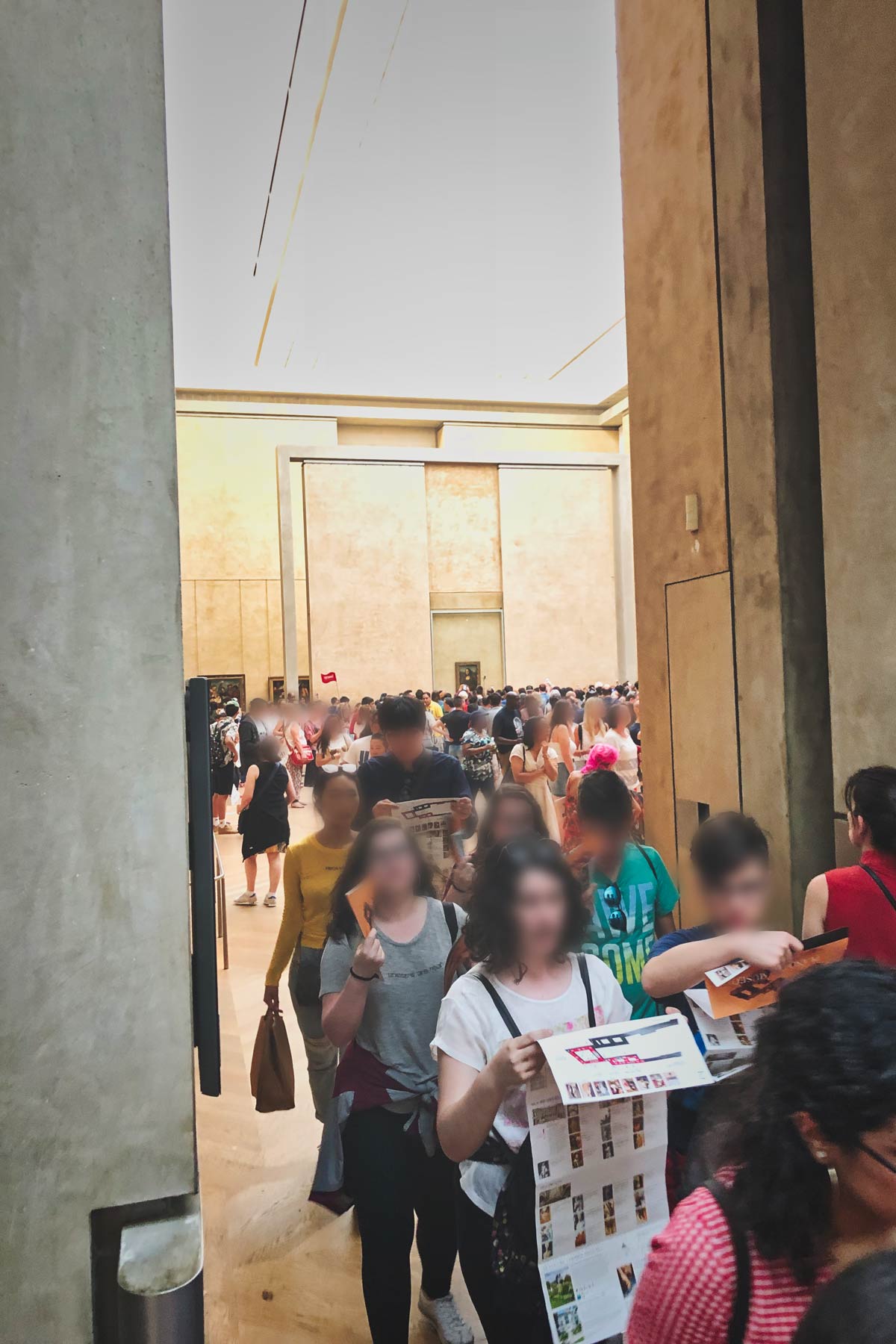 Waiting in the line to get into the Mona Lisa room

I jest, but that’s why I’m writing a separate post about it.  There are lots and lots of cool places and things to see in the world.  Some of them well-known, some not.  The reality of traveling is that in general, if you’re going to decide to see something that a vast portion of the population also wants to see, having realistic expectations about it is important.  Otherwise, you’re going to be disappointed / irritated, etc.  Even with realistic expectations, that’s still a possibility, so I say, be as prepared as possible.

As I mentioned in my post about the Louvre, which you can read here, there are a plethora of amazing things to see in the museum. and most of them don’t attract the kinds of crowds that the Mona Lisa does.

So what’s it actually like to see it?  Maybe there’s a time of day you can go when the crowds aren’t as full as when we were there, but our experience was as follows:

Despite the crowds, I did get one brief chance to photograph the painting, but not up close.  As I said, we waited and waited, and tried to get closer, but the shoving was annoying, and it seemed like it was going to take another twenty minutes to get right up to it.  I stepped back and put my telephoto lens on my camera. I made sure the settings were correct with a very fast shutter speed, put the camera into burst mode, lifted it up as high as I could, stabilized my arms as best I could, aimed by watching in the viewfinder… and let her rip.  I got this shot, which I was able to enjoy at home later, a lot closer and more detailed than I was going to get in person.  The spots near the bottom are reflections from the bulletproof glass in front of it. 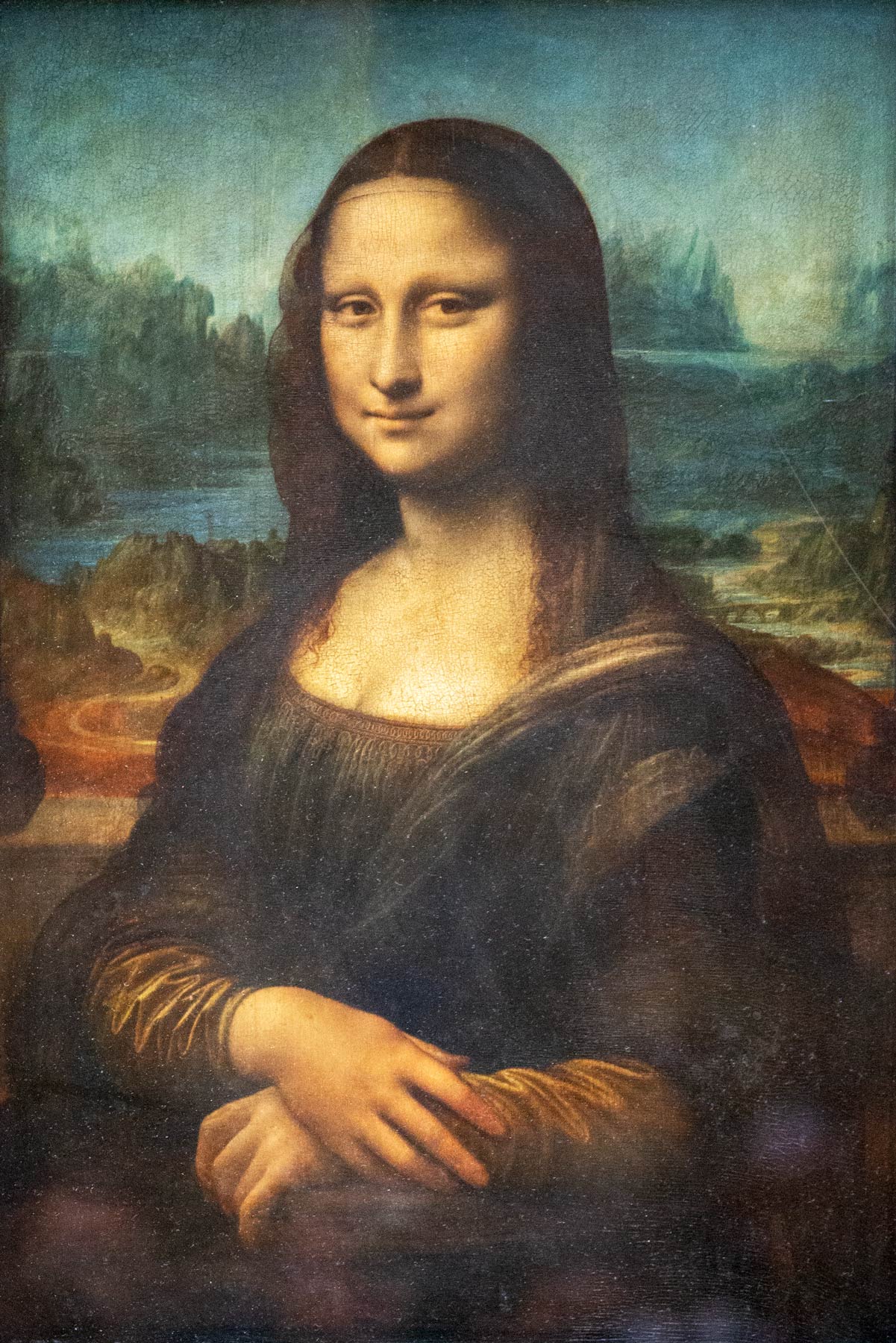 After seeing so many other incredible exhibits and pieces of art in the Louvre, I walked out of the Mona Lisa exhibit feeling like, “Cool.  We saw the Mona Lisa.  Neat.  What’s next?” I was disappointed that I didn’t feel more, that I wasn’t particularly moved by it.  I wanted to be wowed like the first time I saw the Rosetta Stone in person and nearly burst into tears.  That’s a story for another post…

As I mentioned at the beginning, my hope in writing this is to provide a realistic expectation of what it’s like to see something that so many millions of other people also want to see.  It’s a little hectic in there, and in the end, there were a lot of other places in the museum where I wanted to spend a lot more time.  Admittedly, the masses of people contributed highly to that feeling.  Because of the crowds, there was no time or space to actually contemplate the painting, it’s history, and it’s effect on our world, let alone allow the artwork to access my emotions.  However, that’s me, and your experience may vary.  Some people are not bothered by big crowds.  I’m generally not a fan.

After coming home and looking at my photos, I was able to take the time to actually think about the painting.  That’s when it started to mean more.  Regardless of the fact that it’s famous because it was stolen, the Mona Lisa is a legendary piece of artwork.  It’s been enjoyed by millions of people and looked at for over five hundred years.  It’s an icon of human history, and at the end of the day, I’m grateful we got to see it in person.  That’s amazing and it is worth the trip.