You’re really not going to believe how big the Louvre is.

It’s the largest art museum in the world (by gallery space).  According to Wikipedia:  “The Musée du Louvre contains more than 380,000 objects and displays 35,000 works of art in eight curatorial departments with more than 60,600 square metres (652,000 sq ft) dedicated to the permanent collection.”

In other words, it’s HUGE.

I’d wanted to see the Louvre for many, many years and the first time we were in Paris, we tried. You can read all about that here.  A few trips around the sun later, we were in Paris again and put it at the top of our list.  This time, we followed Moonbird’s Travel Lesson #6, and made sure we knew the museum hours, as well as bought tickets ahead of time so we wouldn’t have to wait in line.  For reference:

On the first Saturday of each month, the museum is also open from 6 p.m. to 9:45 p.m. and admission is free for all visitors.  Rooms begin closing at 5:30 p.m., and at 9:30 p.m. on night openings.  You can also buy your tickets on-line (highly recommended) at this link.

So what’s it like the first time you visit the museum?  Jolene took this photo of us as we entered: 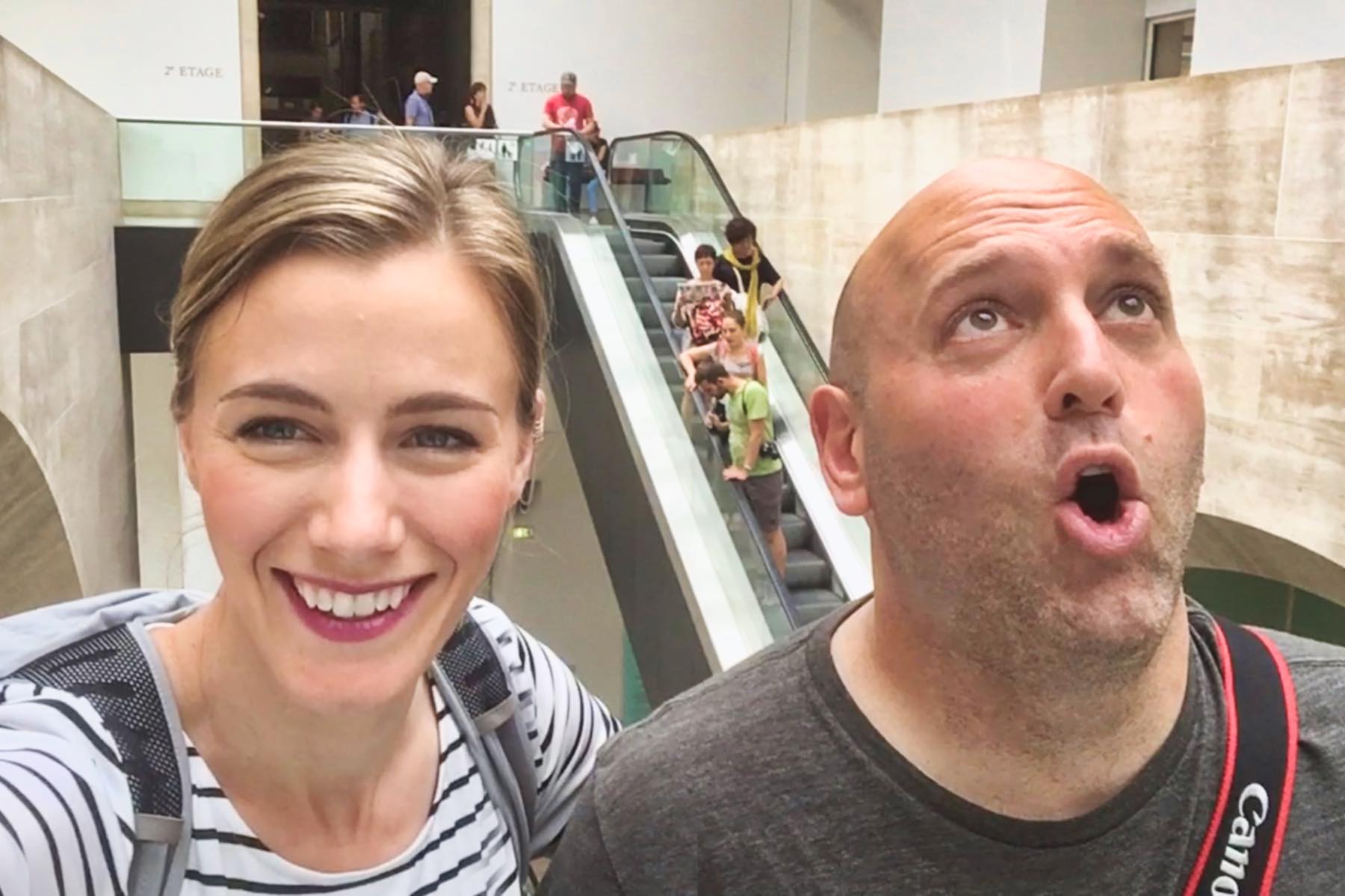 Entering the Musée du Louvre for the first time

After arriving, we consulted the map and decided what we wanted to see the most.  We also took note of what we could miss if we had to.  Cameras in hand, we set off on our adventure.  Like much of France, the architecture alone is just incredible.  You can see the artisan level craftsmanship in every centimeter. 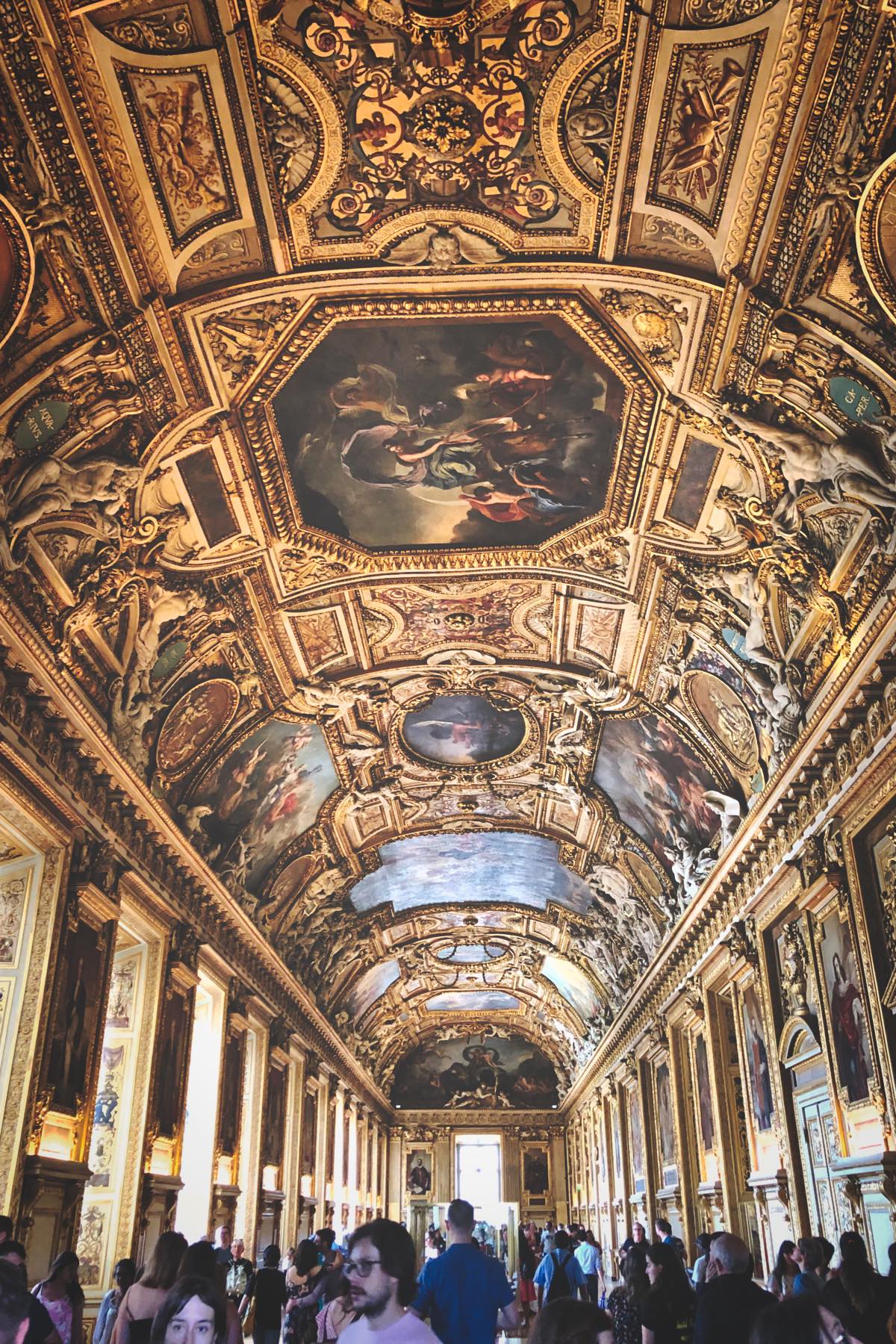 One of many gallery ceilings inside the museum

Even the regular hallways of the museum are crafted beautifully: 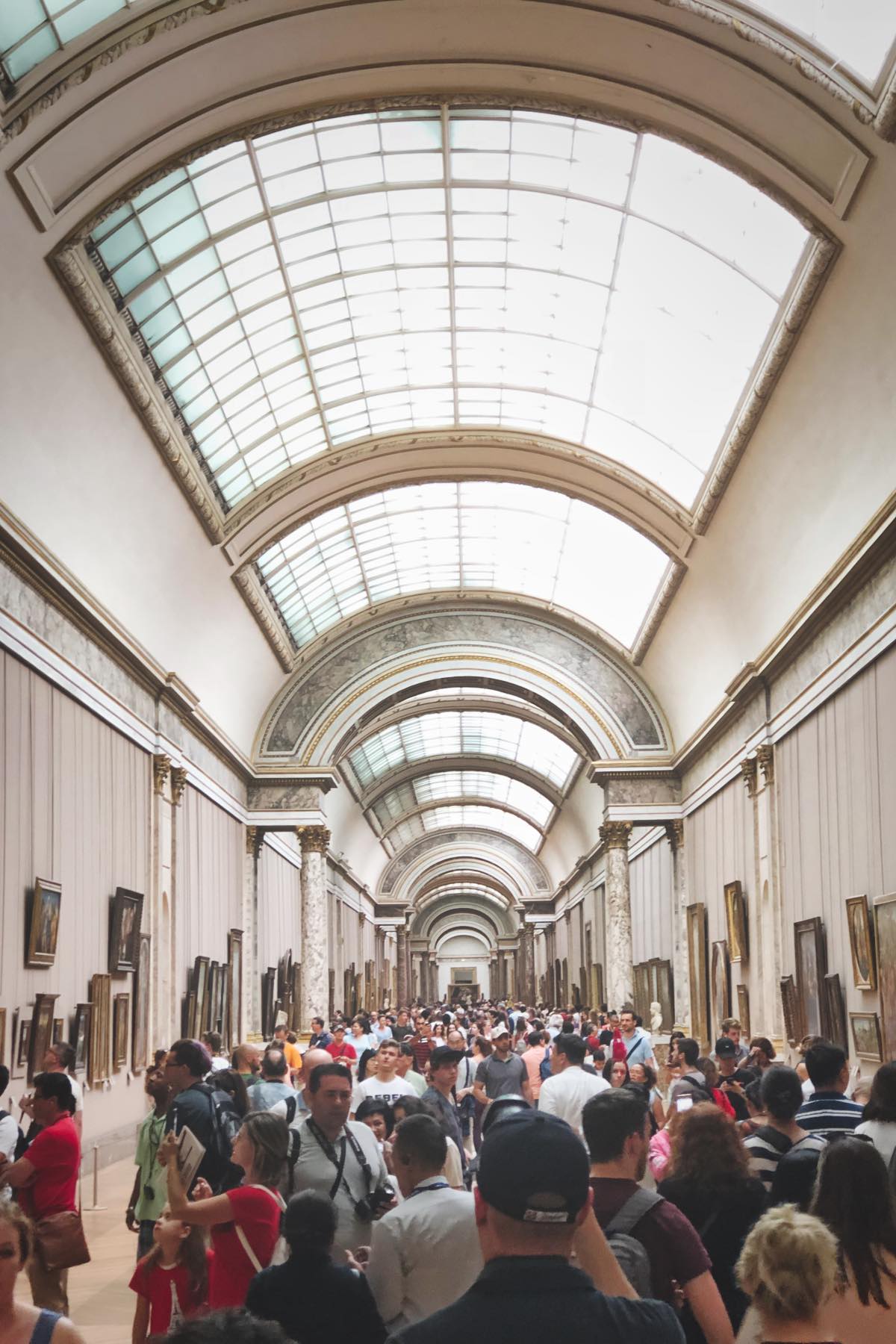 A gallery hallway in the museum

As you can see in the photo above, the main thoroughfares of the museum have a lot of people in them.  As do the more popular attractions like the Mona Lisa.  I wrote a separate post about the Mona Lisa exhibit here.  Surprisingly though, even with lots of people milling about, once you head into a particular gallery, you often find peace and quiet to take in the art. 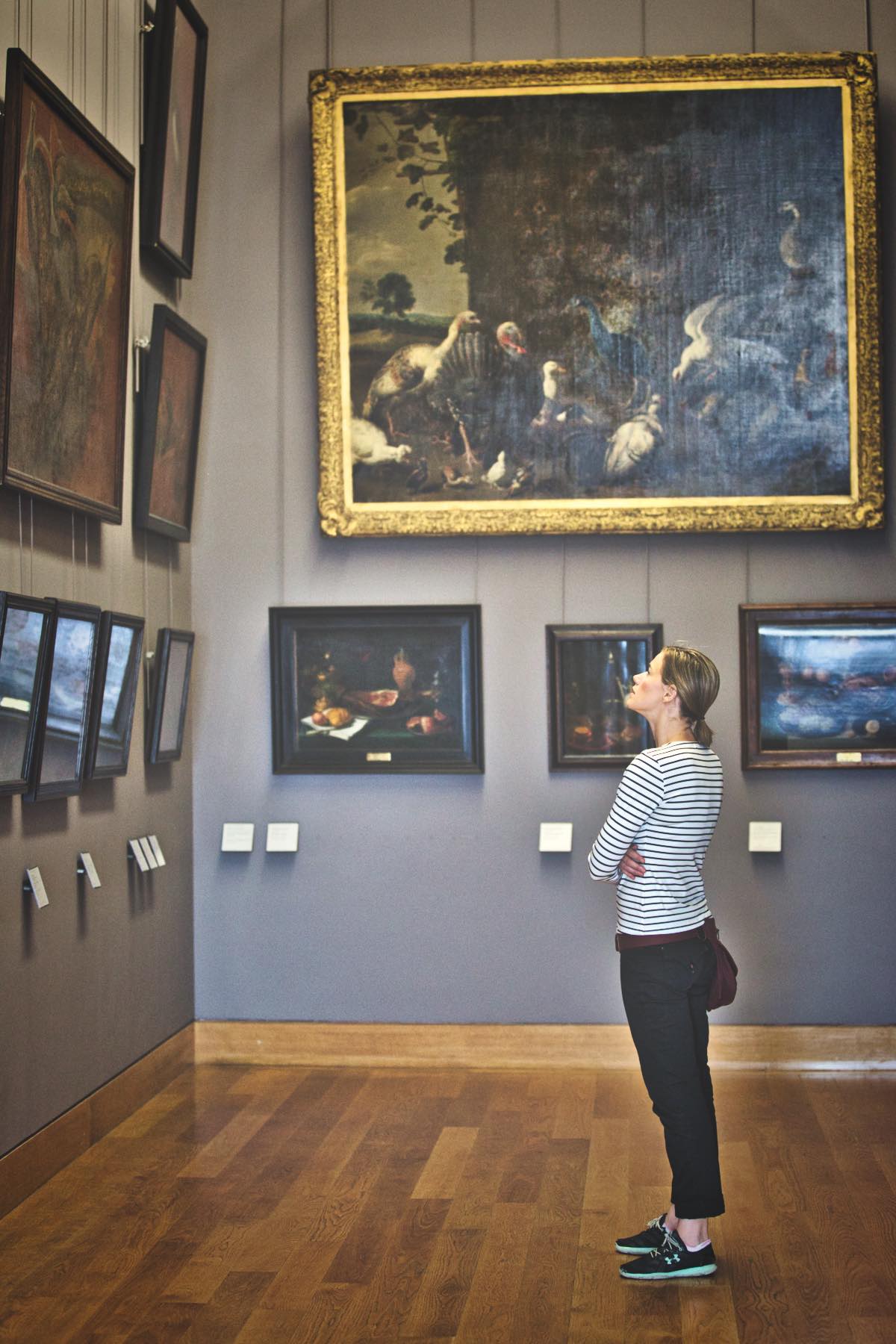 Jolene taking in some artwork 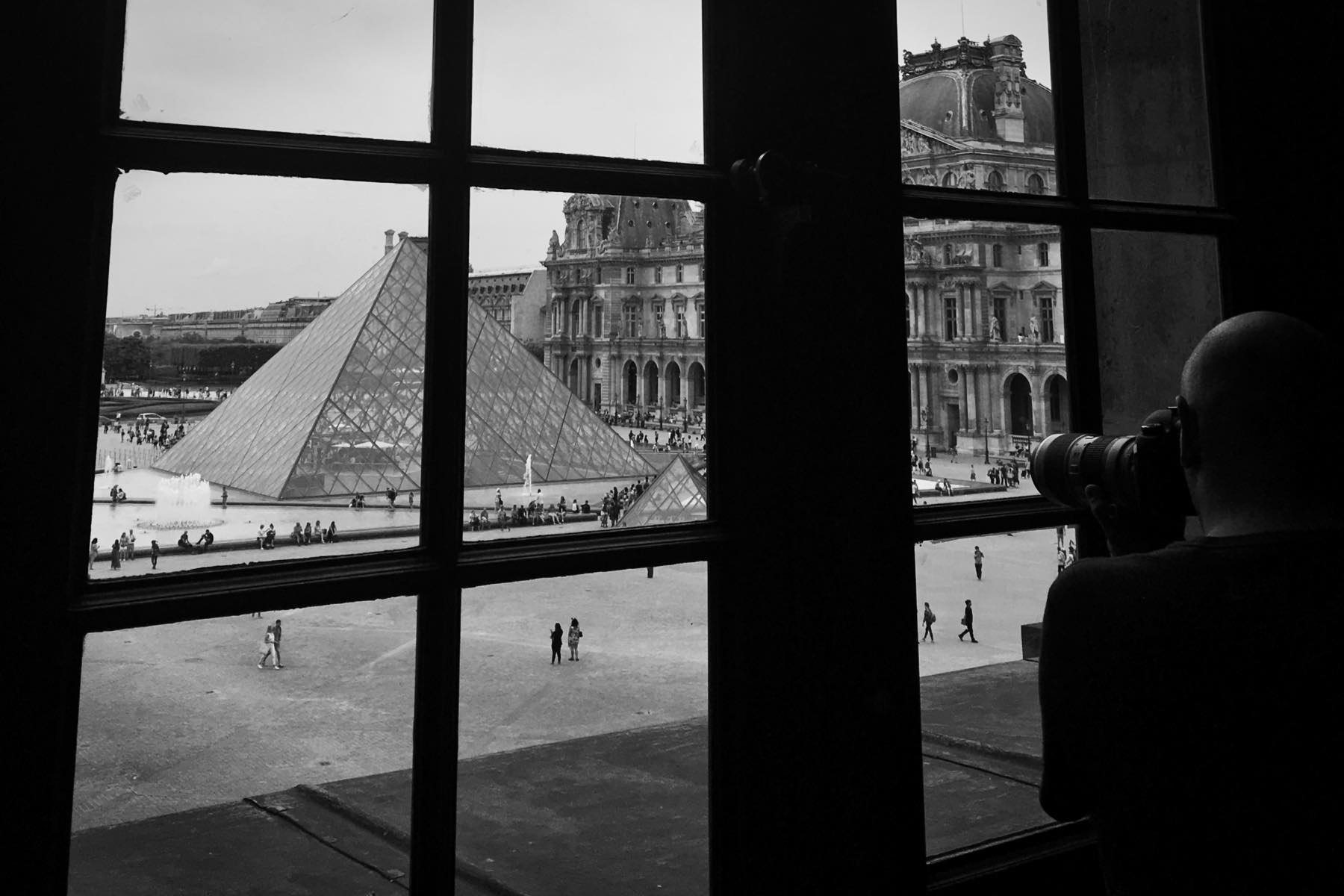 Me photographing the Pyramid. Photo by Jolene Kay

After enjoying the exhibits for a couple of hours, we were getting pretty hungry.  We decided to splurge and get some food at one of the fancier restaurants inside the museum, The Café Richelieu-Angelina.  It’s a foodie paradise.  The dessert display alone is ridiculous.  The dining terraces overlook the Pyramid and the menu is gourmet.  And very delicious. If you like French food.  Or good food.  Or food.  Or are a human with any discernible taste whatsoever.  I t ‘ s  g r e a t. 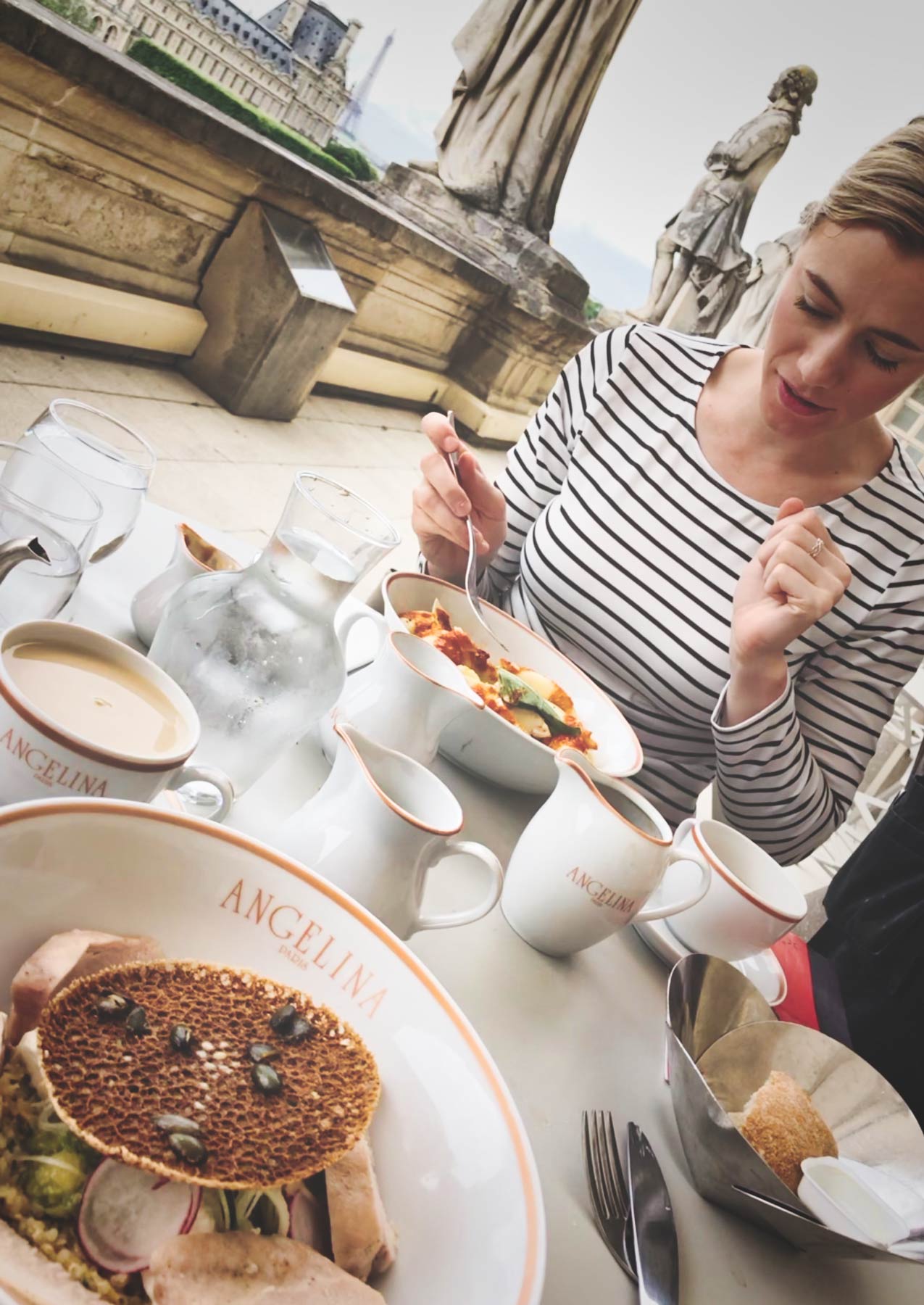 Lunch at Café Richelieu with the Eiffel Tower in the background. No big deal…

How much was lunch?  For two of us to sit on a terrace at The Louvre, enjoying a lovely Spring day, the Eiffel Tower and Paris in the background, and a meal of tea, coffee, two entrees and a glorious dessert, it totaled 73 Euro (82 USD).  Very reasonable as a treat, and I’ve spent a lot more on a lot less.  Worth.  Every.  Penny.  Did I mention that dessert?

We spent most of the day at the museum.  Funny side note, Jolene spotted Nathan Fillion walking around the museum and pointed him out.  We stood right next to him at some point but didn’t bother him out of respect.  It was fun to see him in person though.

One thing that we both thought was amazing were the exhibits not everyone goes to.  I think a lot of people miss them and man, they shouldn’t.  There are lots of Ancient Greek, Armenian, Spanish, and other artifacts from around the world that make you feel like you are Indiana Jones, looking at the next great piece of a very old puzzle.  Things like these: 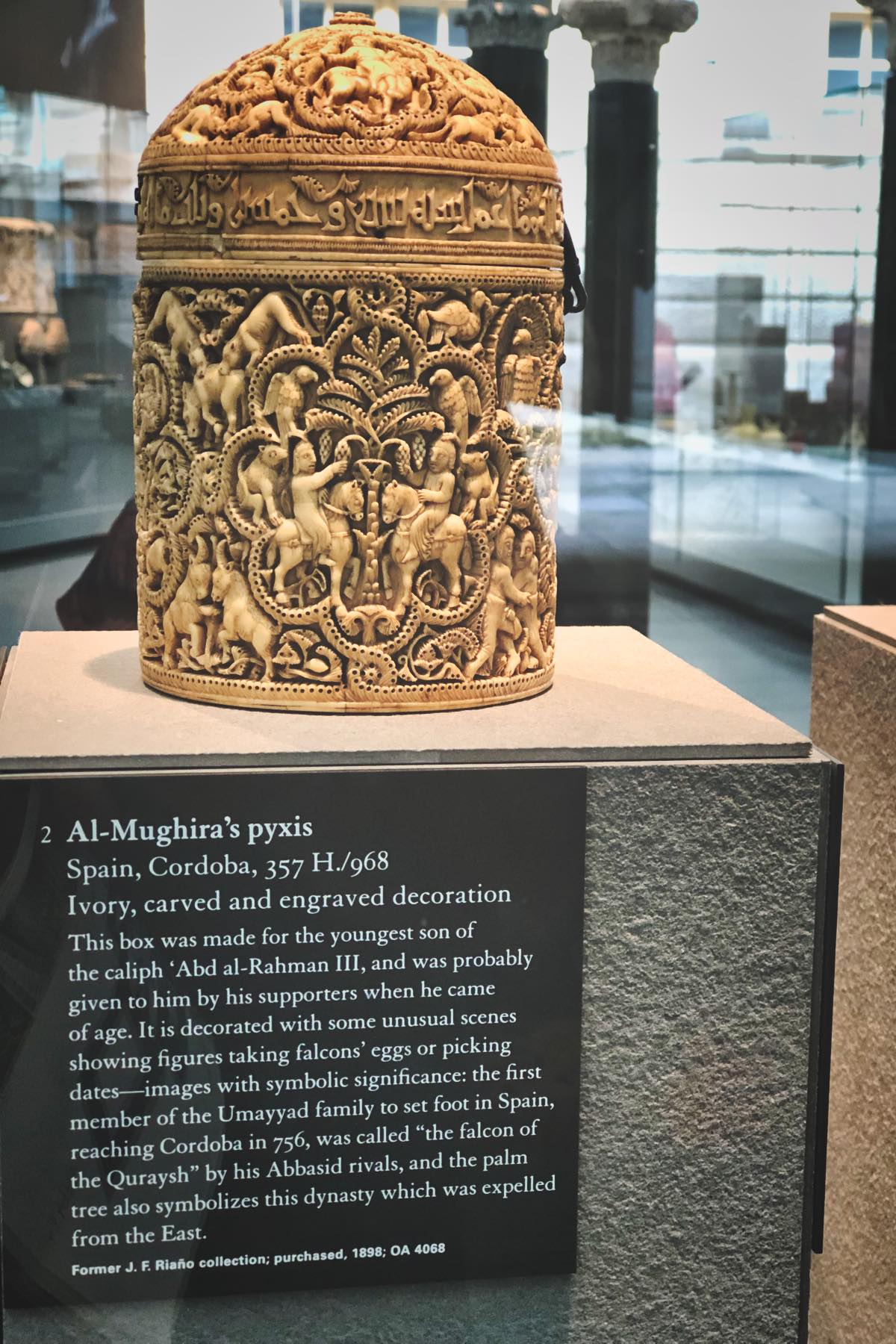 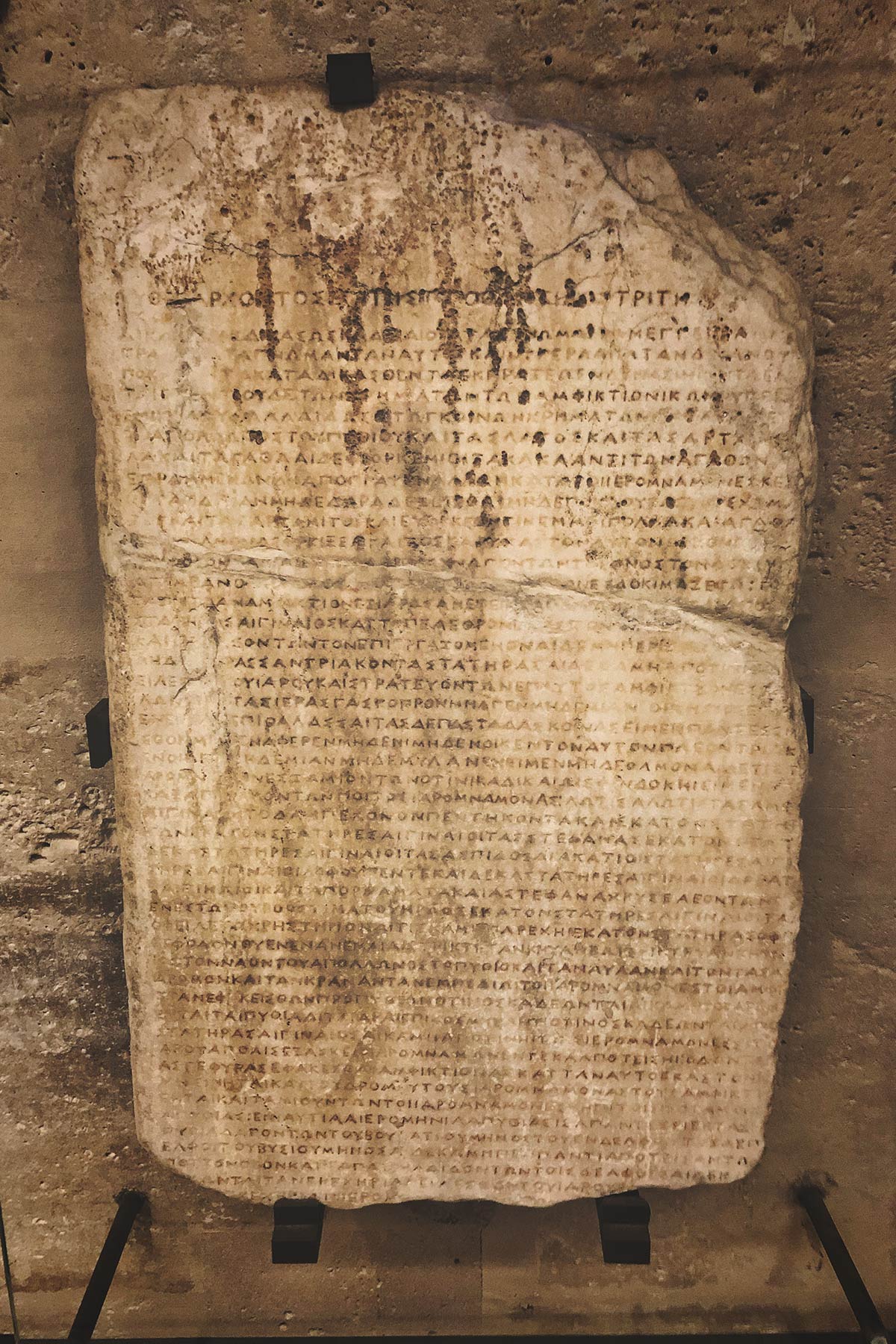 Ancient Greek tablet. It says, “Be one of the cool people. Subscribe to the Memories of a Moonbird Newsletter”

After the Louvre, we met up with our Parisian friends for a late dinner.  I highly recommend taking in some meals later at night as the city of Paris is alive at those hours in ways most cities aren’t.  We also bought a very special umbrella, and enjoyed a late night walk to the Eiffel Tower in the pouring rain.  And shared a delicious bag of cherries.  But that’s a story for another time.  🙂

I know I’ve highlighted so many of the awesome things about the Louvre, so is there anything not so awesome?  Honestly, not much, but there are a couple, and they all have to do with crowds.  Like anywhere in the world, crowds can bring out some very frustrating things.  Depending on when you go, there can be long lines for restaurants, shops, and bathrooms.  We try to hit those things before or after the normal rush times, and it helps.  As an example, when we went to The Café Richelieu-Angelina, we got there before lunchtime and were seated within ten minutes.  When we left, the line was down the hall and looked had at least a 30 – 45 minute wait.

Another thing big crowds bring is a plethora of smells.  From the mixture of 1,000 different perfumes and colognes, to the various kinds of human scents covering everything from bad breath to body odor, the larger the crowd, the more of an olfactory experience you may have.  I have a very sensitive sense of smell, and surprisingly, found the Louvre to be pleasant and mostly without issue.  There was one man whose breath could have killed a Tyrannosaurus… but beyond that, it was good.

The only somewhat unpleasant thing… was the Mona Lisa.  And you can read all about that right here in part two of my France series.