That’s the only way I know how to describe it.  It has you in awe over and over again.  From the palace to the gardens and the fountains to the grand canal, it is extraordinarily magical.  For you fact lovers out there, it’s total grounds weigh in at just over 2,000 acres, which makes it the world’s largest royal domain.  The palace alone is over 700,000 square feet.  Bottom line… this place is beyond impressive.

It’s a very short and enjoyable hour train ride from Paris to Versailles.  Forty minutes if you’re going by car and have good traffic.  As always, follow Moonbird’s Travel Lesson #6 and make sure you check the open hours for the Palace.  You should also purchase your tickets ahead of time, which you can easily do right here.  They even have a nice PDF comparing all of the different tickets available, which you can download here.  A really cool side note… access to the Palace and the estate of Trianon is free for visitors under 18 (or under 26 residing in the EU).  See details here.

Let’s get down to the fun stuff!

The palace was built for King Louis XVI (known as “The Sun King”) in the seventeenth century.  If you’re interested in the amazing history, and how it went from a hunting lodge to a place 112 times larger than the American White House grounds, you can read all about it here.  I actually became interested in Versailles when I started watching the historical drama on Netflix.  Even though some of it was not actually filmed there, a lot was, and to walk in the places that we’d read about and seen on the show was really neat.

People have asked me what it’s like to be inside of the palace and to be honest, while it’s definitely fascinating, it was my least favorite part.  To keep some perspective though, using the words “least favorite part” when you’re talking about Versailles, is like having a five course meal where every course is beyond incredible, but you loved the entree and dessert the most.  It’s all amazing.

The palace itself is something to see, but there were a couple of drawbacks.  One, like our experience seeing the Mona Lisa, the crowds can be intense.  We were there in May, and it was not only incredibly hot inside, but we were so tightly pressed against other people at some point, that we felt like sardines in a can.  We decided to skip a room or two and move into the more open areas, like the famous Hall of Mirrors seen below.  For the record, double the amount of people in this photo to imagine the areas where I said we were jammed up. 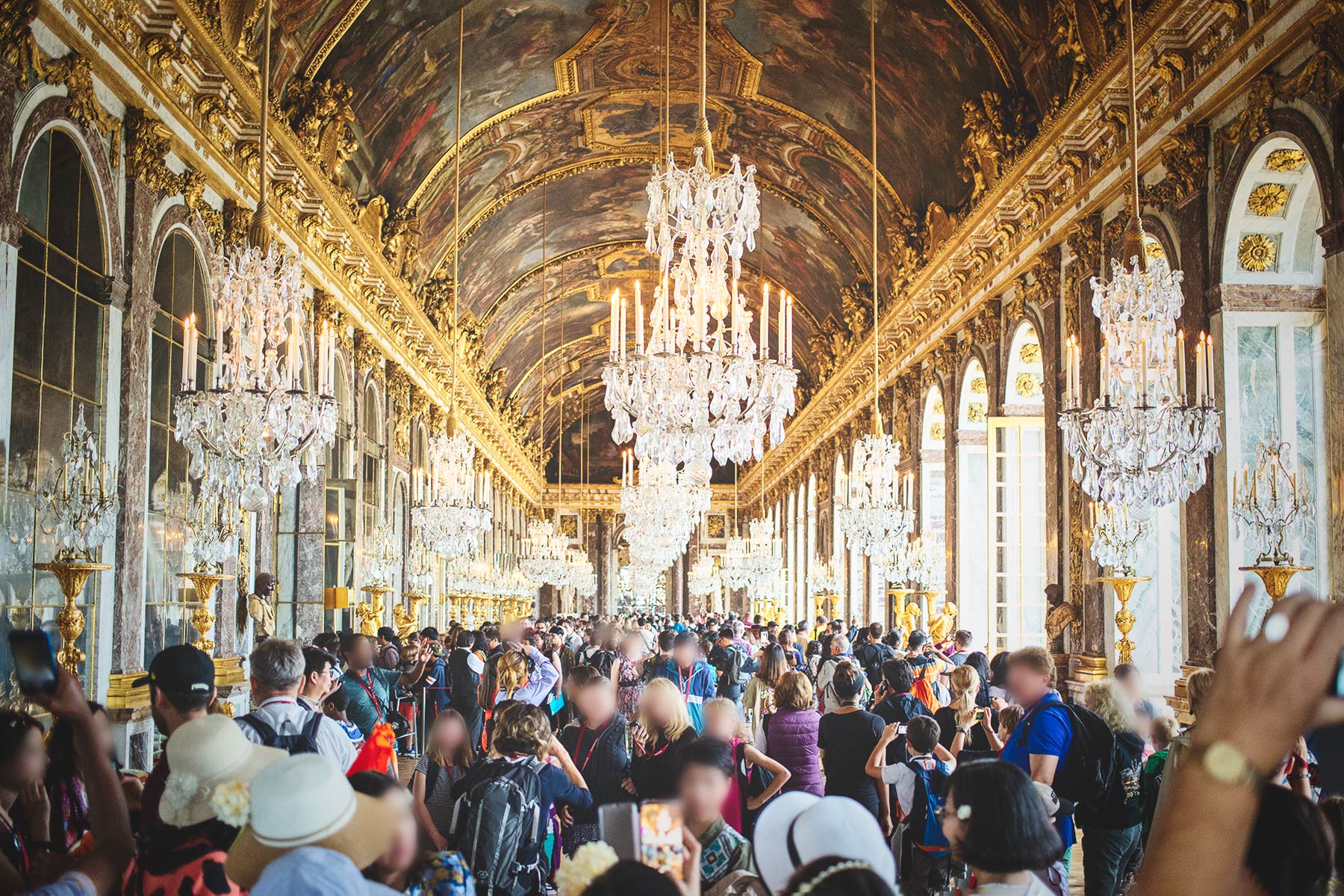 The Hall of Mirrors inside the Palace at Versailles 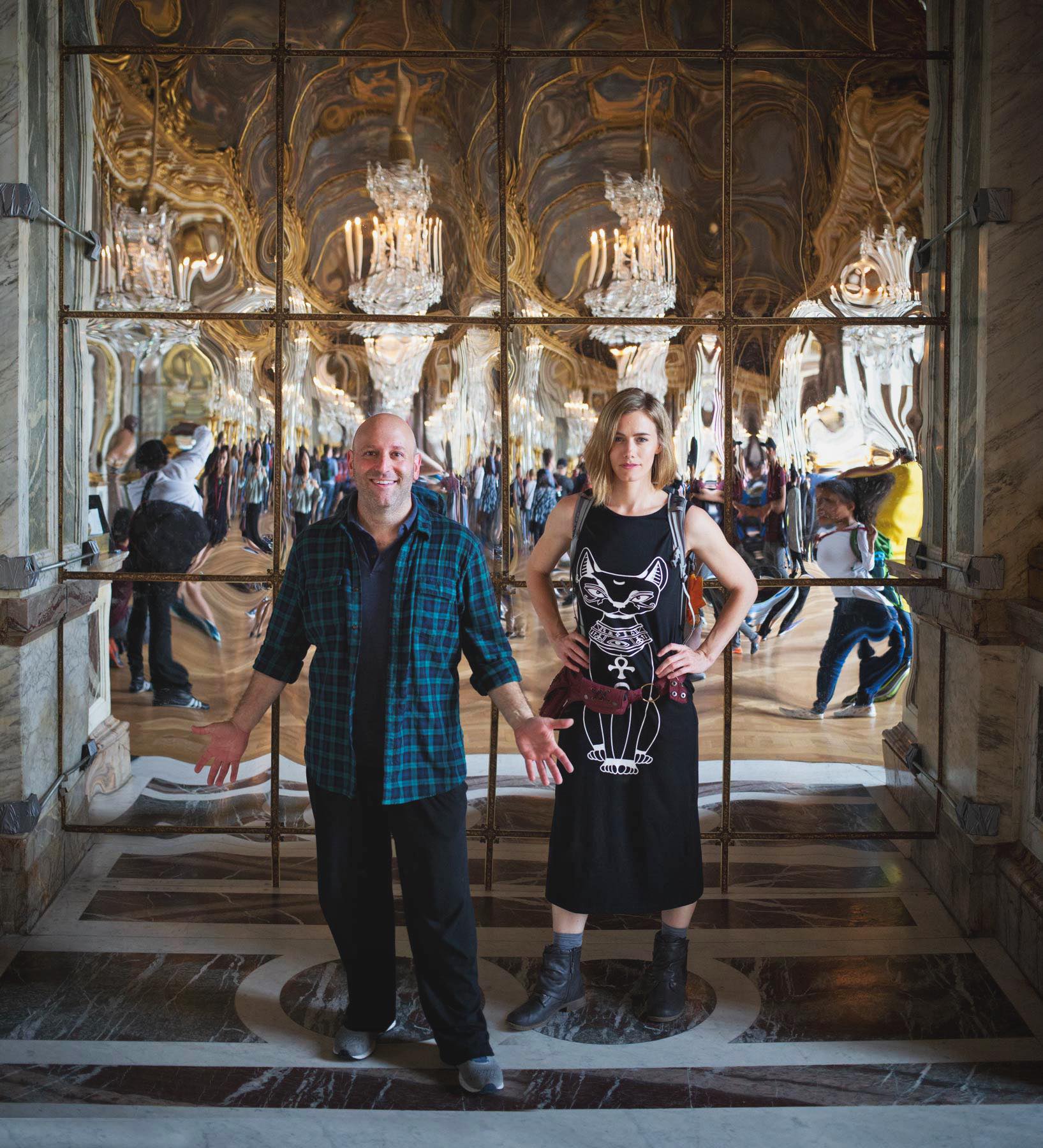 Moonbird and Jetstream in the Hall of Mirrors, Versailles

That said, the architecture of the entire palace is simply astonishing: 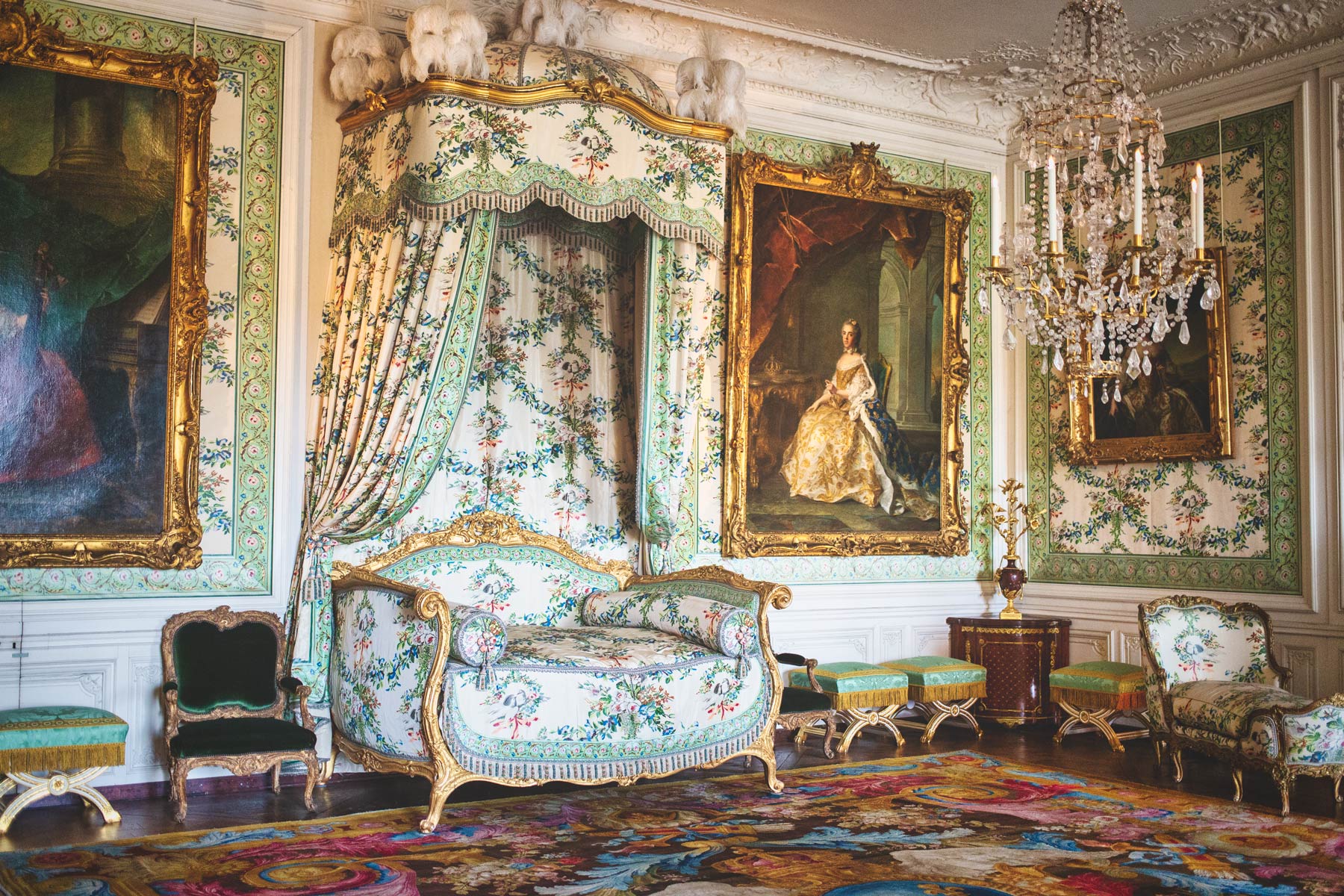 A bedroom in the Palace of Versailles 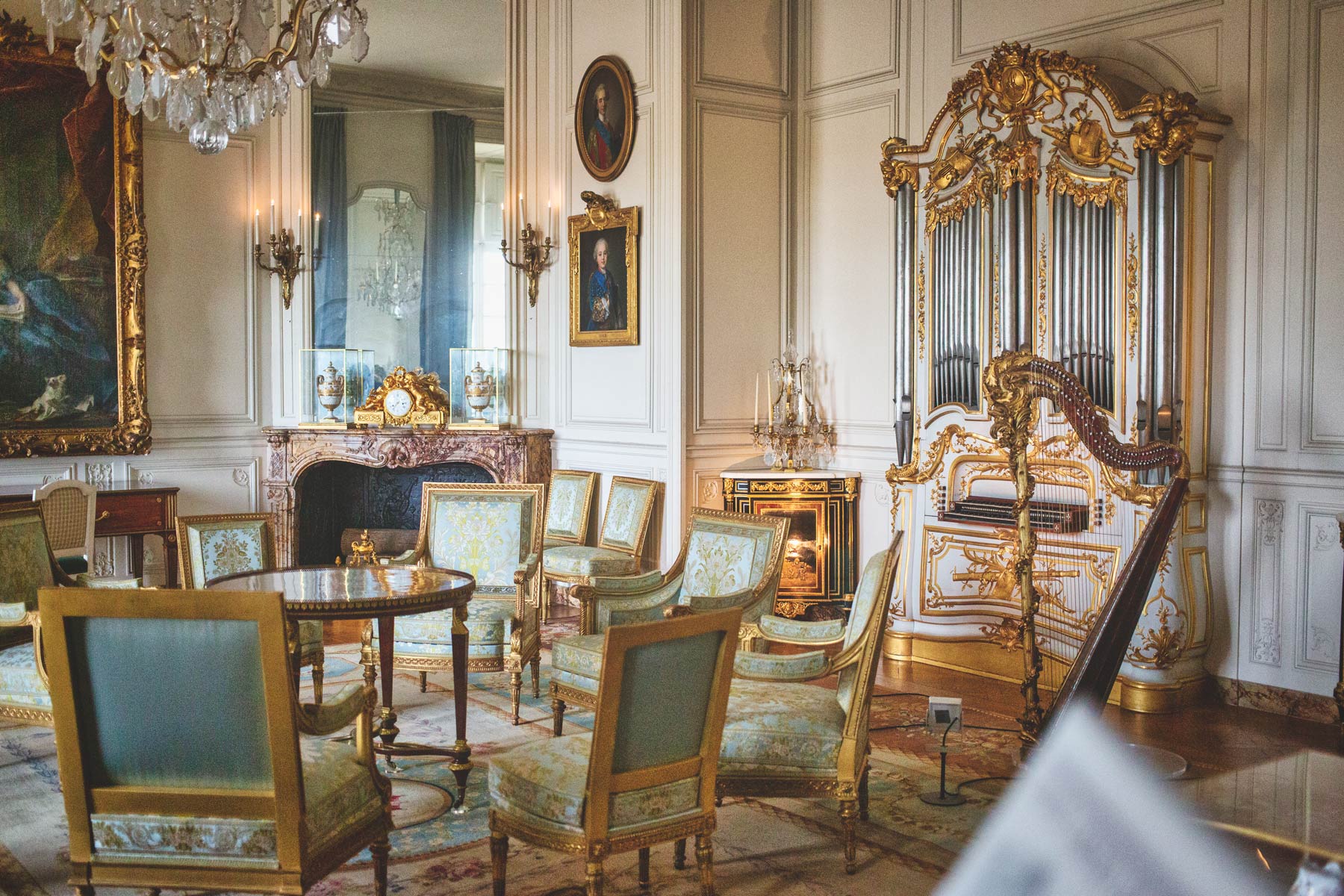 Another amazing room in the Palace of Versailles

Looking at those pictures, you might think that seeing things like that in person, and imagining what life must have been like back then, would be a unique and pleasurable experience.  It was… for ten minutes.  Then the room gets so hot you’re sweating from head to toe.  People are starting to forcibly squish against you as tight as a vise.  You’re getting more and more annoyed.  You can barely feel for your wallet to make sure it’s still safe in your anti-theft inner pocket.  Then someone farts in very close quarters.  It’s painfully and dreadfully obvious that their immune system has been compromised by whatever cheese-filled meat dish they consumed last night that you and every other afore mentioned human sardine are now all paying the price for.  You look at your lovely partner and without speaking, using only your eyes, ask the question, “You wanna get the f**k out of here?”  The wide-eyed look on her greenish face as she’s trying not to gag from the smell says, “I mean… you’ve seen one impressive French bedroom from the 1700’s, you’ve seen them all, right?  Let’s blow this pop stand.”  Together, you dash for the doors like Fezzik clearing the way in “The Princess Bride,” and thirty seconds later, are grateful beyond measure for the gasps of fresh French countryside air.

There, you laugh together at the silliness of it all, that no matter how sophisticated, fancy, or mesmerizing something may be, farts will always hold the real power on Earth.  You breathe a few more deep breaths, share some more giggles, and soon realize you’re now outside staring at the back of the palace.  You turn to see the view you heard was supposed to be pretty incredible.

Everyone else seems to disappear… because reaching out in every direction before you is a vastness of lush green forests, countless pools, fountains, sculptures and manicured bushes.  In the distance, the reflections of the perfect clouds and deep blue sky dance on the waters of the Grand Canal.  It stretches all the way to the horizon.  It’s all so big your brain has trouble believing it.  You try to comprehend that one man was the King of all of this.  You try to comprehend what it was like to dress in hand stitched clothing rich in every detail and dance to the sounds of live musicians when there was no such thing as an internet, a plane, or a mobile phone.

And if you’re me… you say out loud in a stunned voice… “There’s no camera that can show the world how this place feels.”  Nevertheless, here are a couple of shots:

View from the ground looking towards the Grand Canal 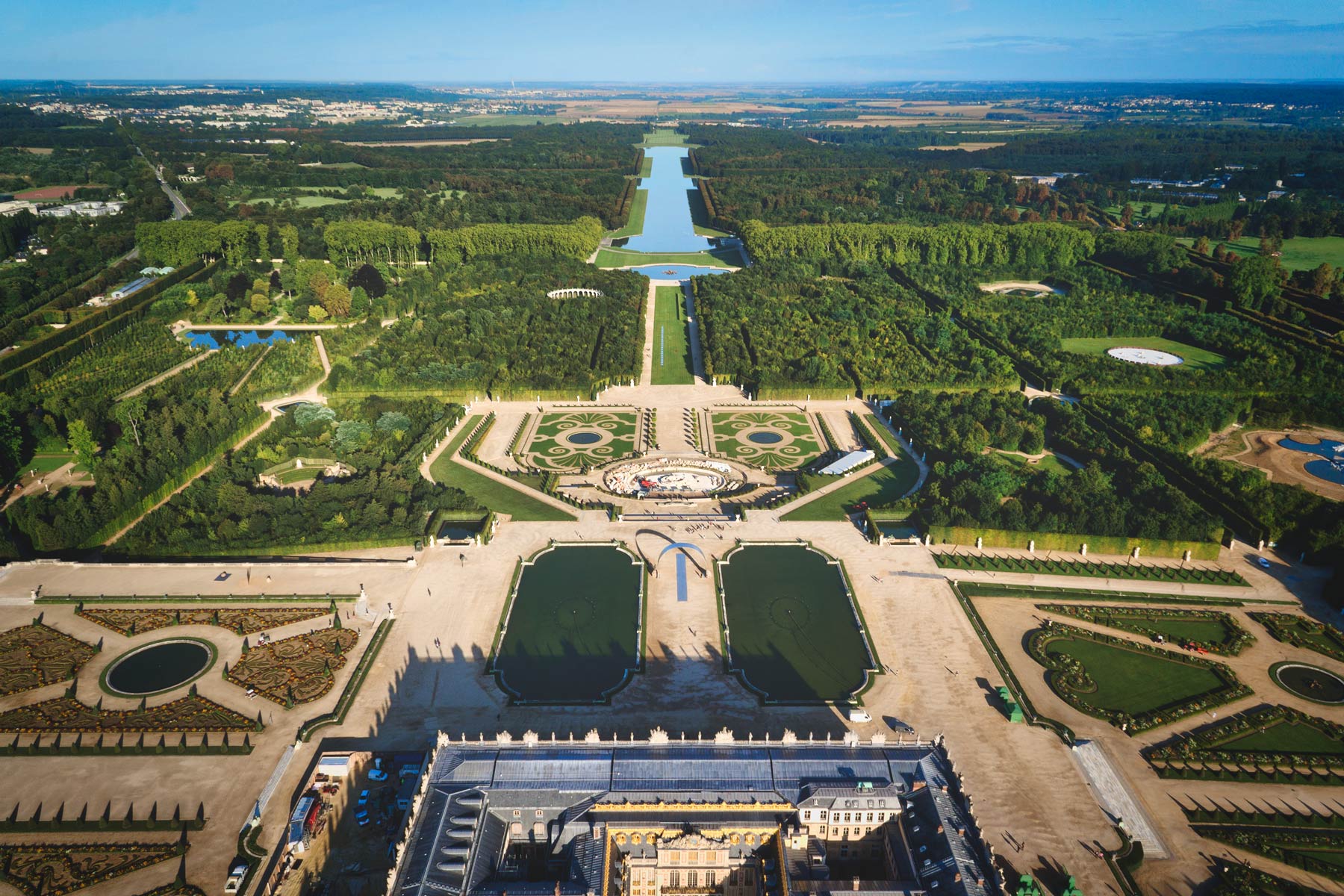 Aerial view of the Gardens of Versailles (creative commons by sa 3.0 – 22)

At this point, you turn into a twelve year old, and look at the map of the grounds you were handed at the beginning of the day.  You understand now why you need a map.  It would be easy to get lost here.  Then it’s time to choose your path… and off you go!

We excitedly walked through the upper tier of pools and gardens.  That alone takes some time because not only is the view amazing looking back towards the Grand Canal, but even off to the sides, it’s stunning.  Like this view, which is just one small garden of many: 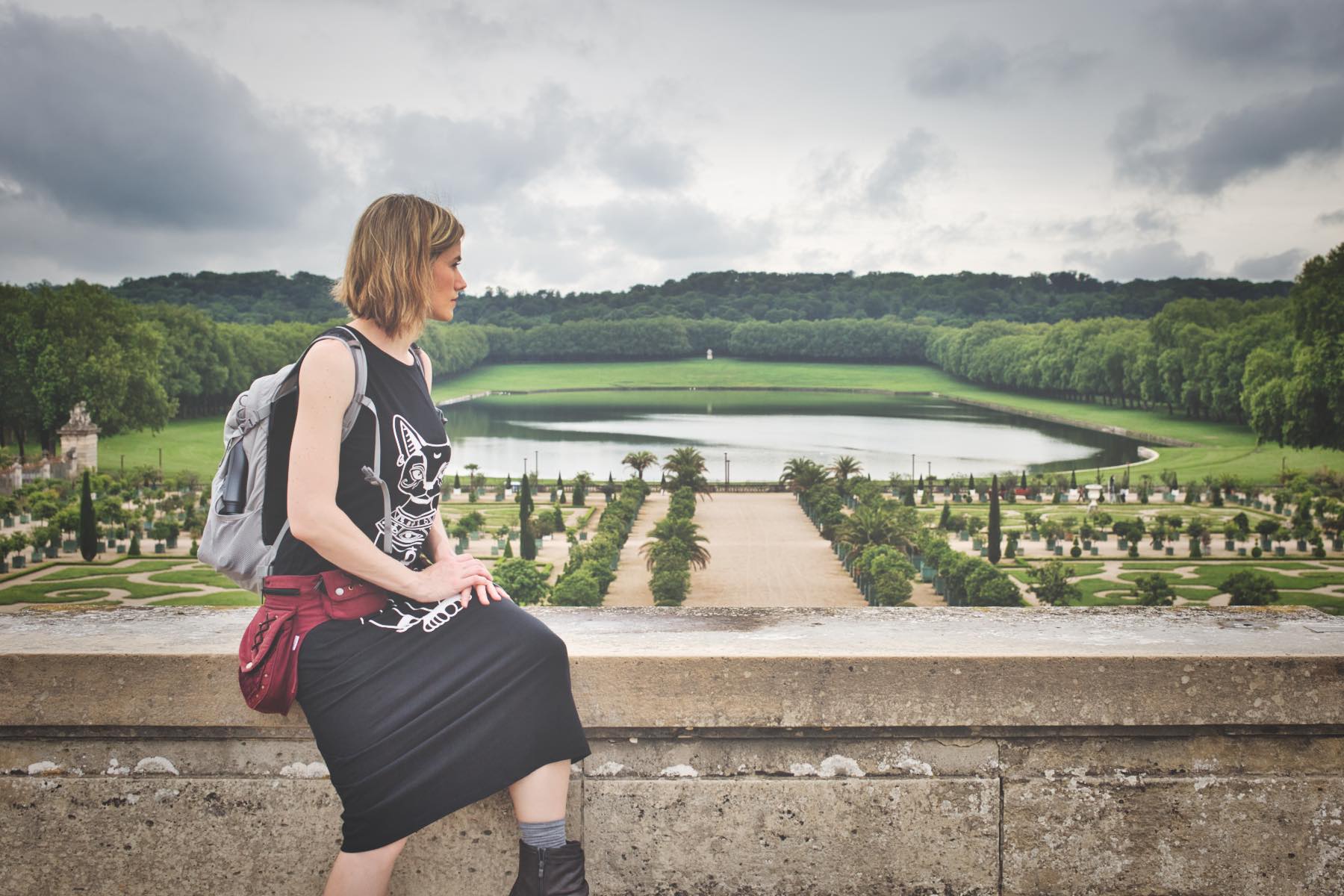 Jolene looking out at one of the many gardens at Versailles

The level of precision and care of there landscape is something I don’t have words for.  It is truly breathtaking.  We spent a couple more hours walking the main grounds and seeing different water shows at the many fountains.  All of them are put to fantastic classical music and it’s a blast.  Pun intended.  Mostly, we loved enjoying the maze of never-ending green and taking photos.  I am particularly fond of the mood of this one that I shot: 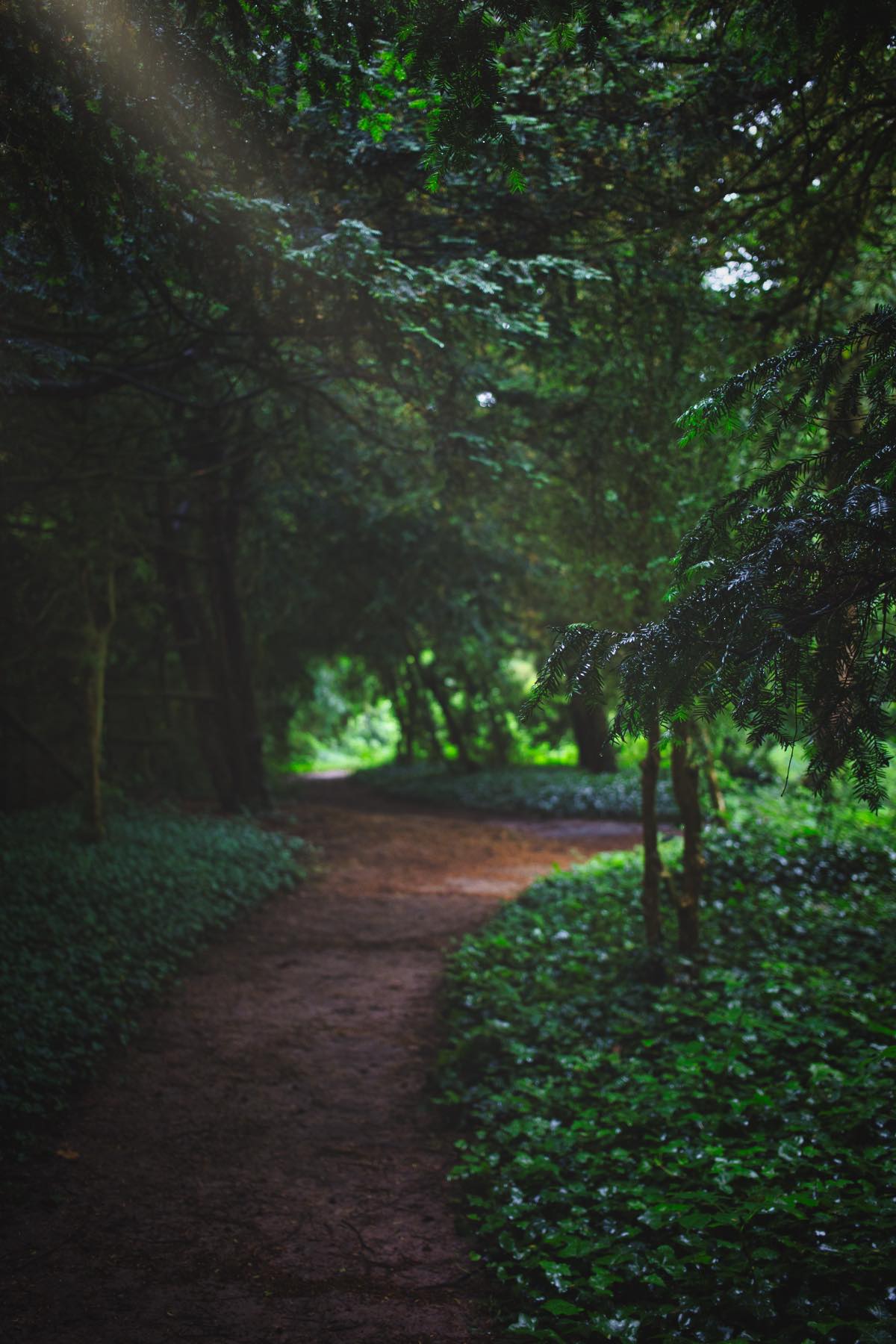 Light on the trees at Versailles. Photo by Daniel Scherl 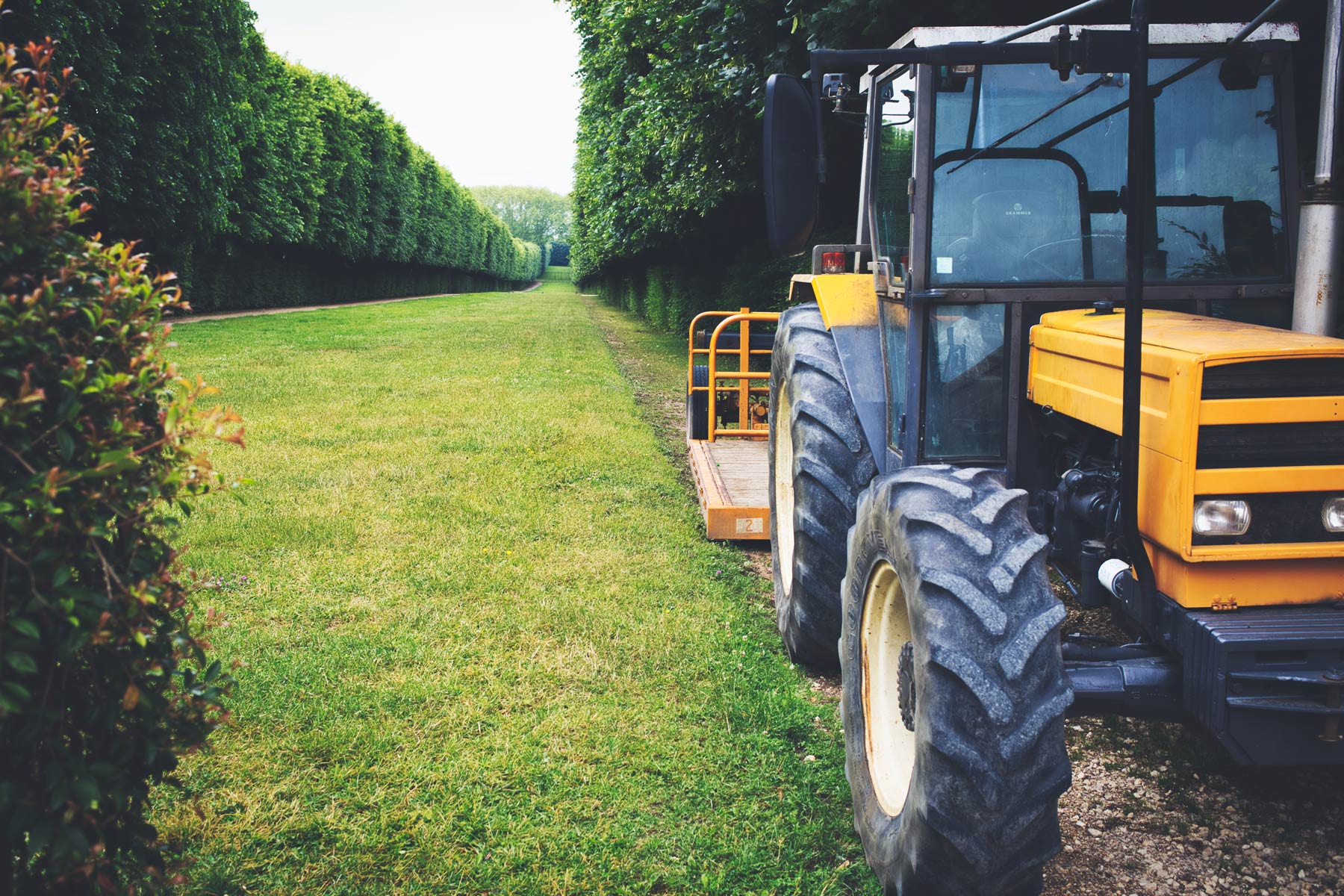 A tractor in the Gardens of Versailles. Photo by Daniel Scherl

We found ourselves getting hungry and so we made our way towards the Grand Canal, which we had purposely saved for last.  There are some places to eat there, bathrooms, etc., so we enjoyed a snack, people watched, and shared a very delicious ice cream.  Then, we rented a boat, and off we went to fulfill a dream of mine:  to paddle the Grand Canal at Versailles.  We specially did this later in the day with the hope that the crowds would be thinner, and we were spot on. It was everything I hoped it would be.  I could sit here and use a lot of fancy words to describe just how lovely it really is, but just try to imagine being with the person you love in a paddle boat on a huge body of calm water surrounded by rich, green trees, ducks and swan milling about, a warm breeze blowing around you, and a feeling of true peace.

It’s even better than that.

The featured photo at the very top of this post was taken from our boat.  Here it is again so you don’t have to scroll back.  🙂 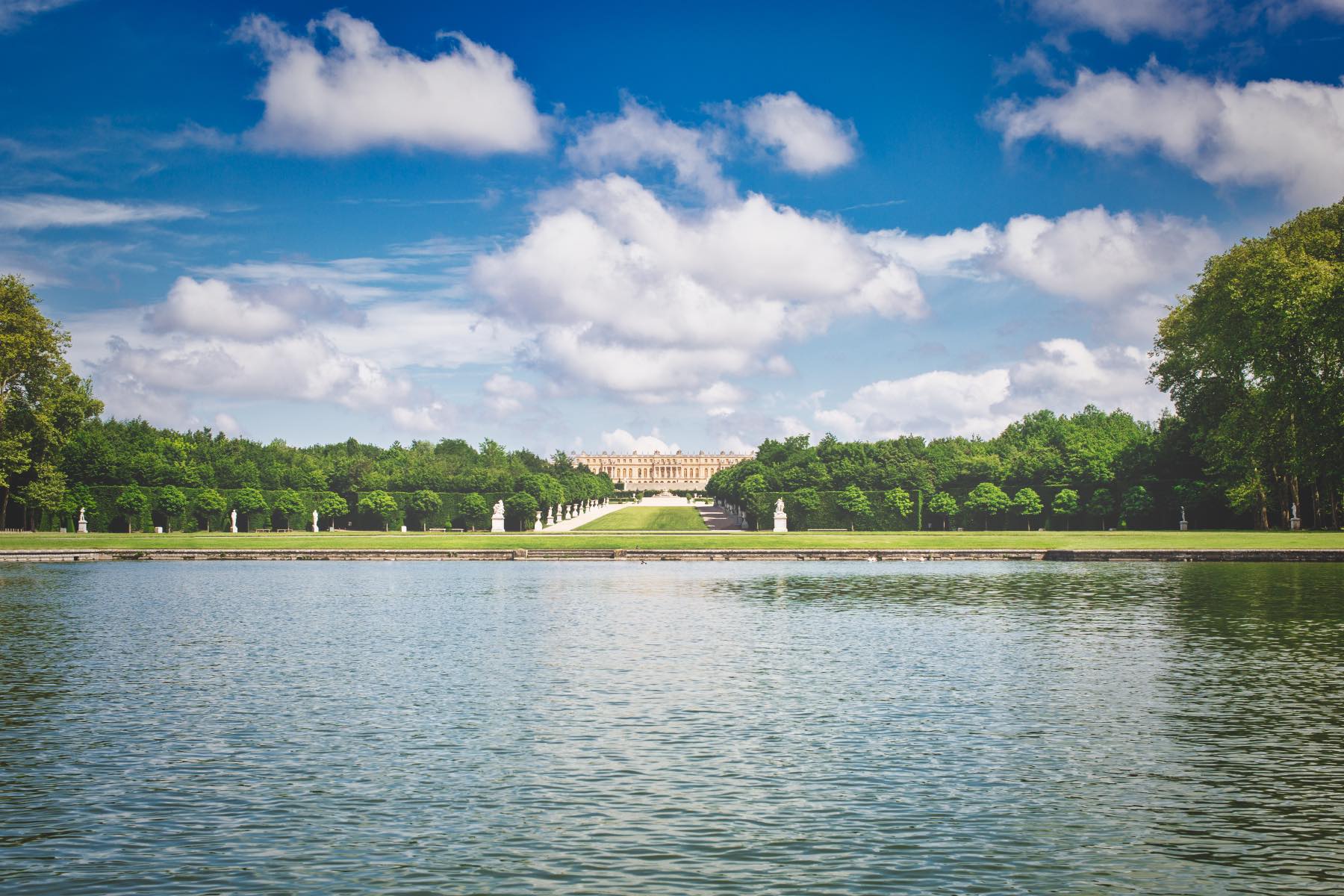 The Palace at Versailles from a boat on the Grand Canal

As an aside, it’s been more than thirteen years of adventures and craziness together, and I don’t ever get tired of looking at her face or sharing an ice cream together. 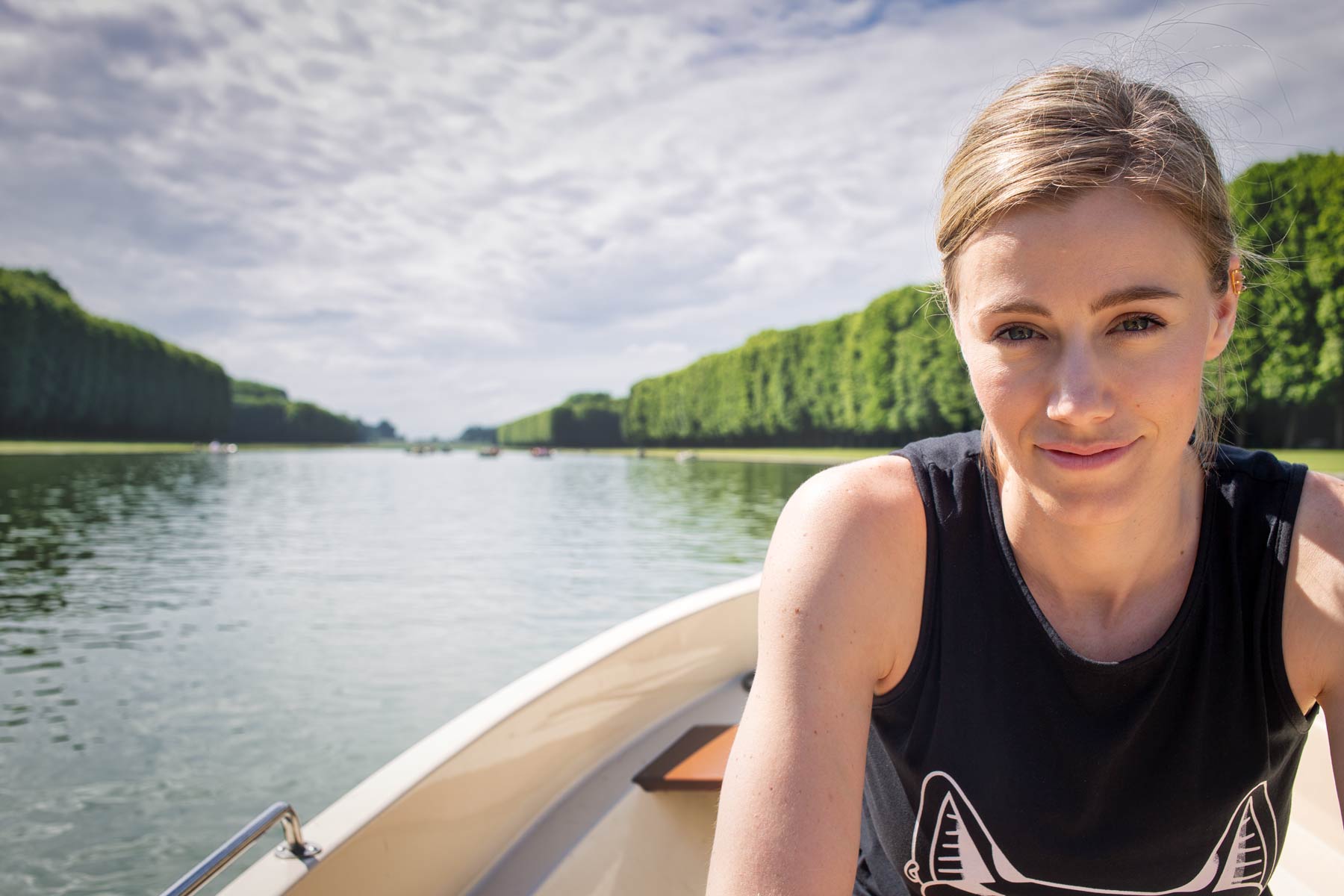 Jolene and me in a boat at Versailles

Just when you thought this post was done and I was going to wrap it up, there’s one more thing.  One AWESOME thing.  Jolene and I are both huge animal lovers.  Many of our adventures are planned around animal experiences, but it’s the surprise ones that are always even more fantastic.  When we got back to shore and returned our paddle boat, we were thinking about what to do next and whether we were ready to head back to Paris or not.  We decided to sit down on the grass and enjoy one last look at it all, when a mother swan and her babies (called cygnets) were getting close to us.  I began shooting pictures and video right away.  Then… they came up on shore and literally waddled right up to us!  They were obviously used to people and this mother moved with a swagger that said, “Move aside, humans!  We need to preen!”

A swan family preening at the Grand Canal

For the next hour, we sat next to these beautiful creatures and watched them groom themselves.  One of the cygnets fell asleep, so I stared shooting even more photos.  This one hangs in the house: 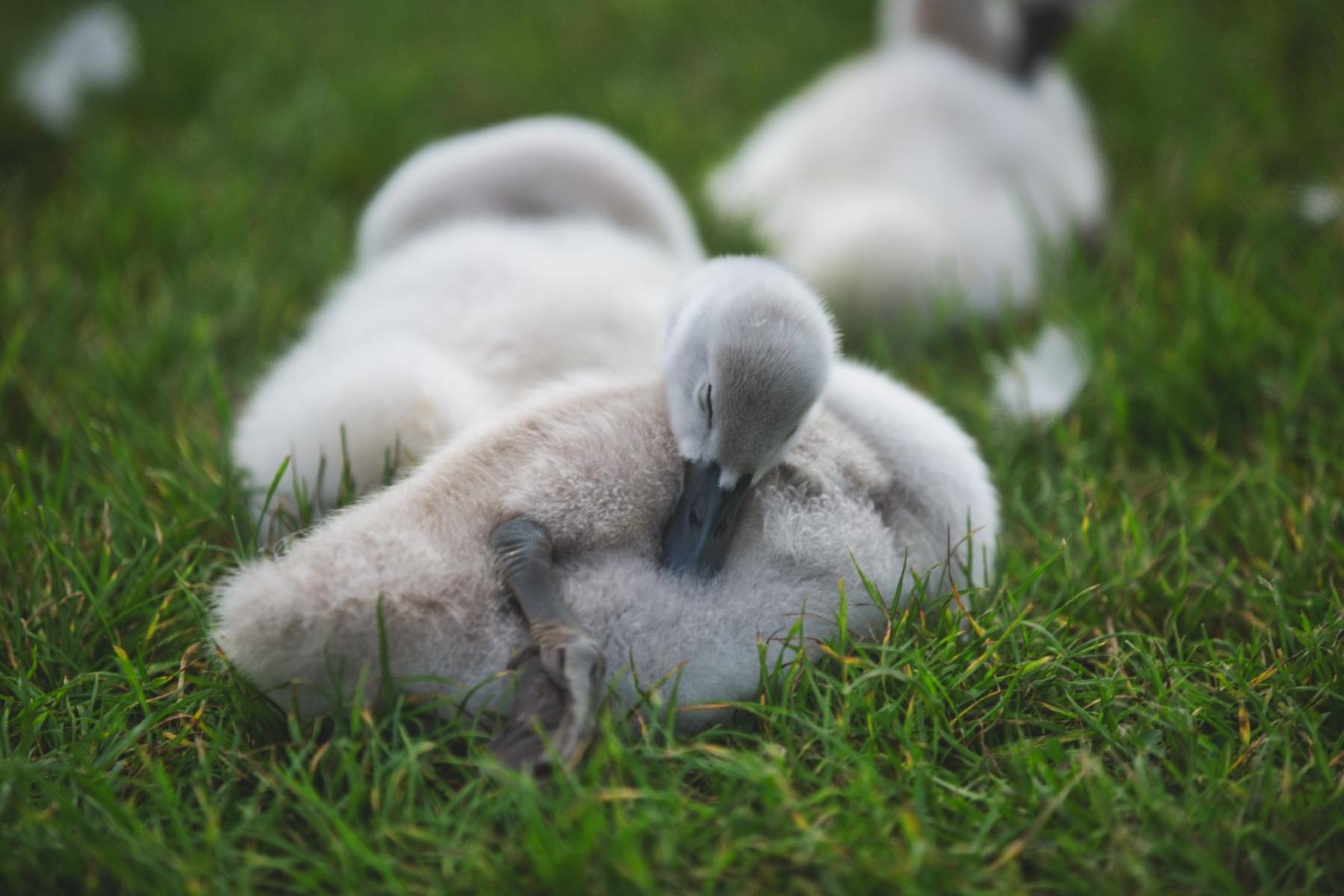 Sleeping cygnet at the Grand Canal. Photo by Daniel Scherl

Jolene happened to be filming when, for some reason, even though I’d been sitting in the same spot for a good thirty minutes, the mother stopped and looked directly at me.  I looked at her.  I didn’t move.  She didn’t like that.  🙂  Then this happened: 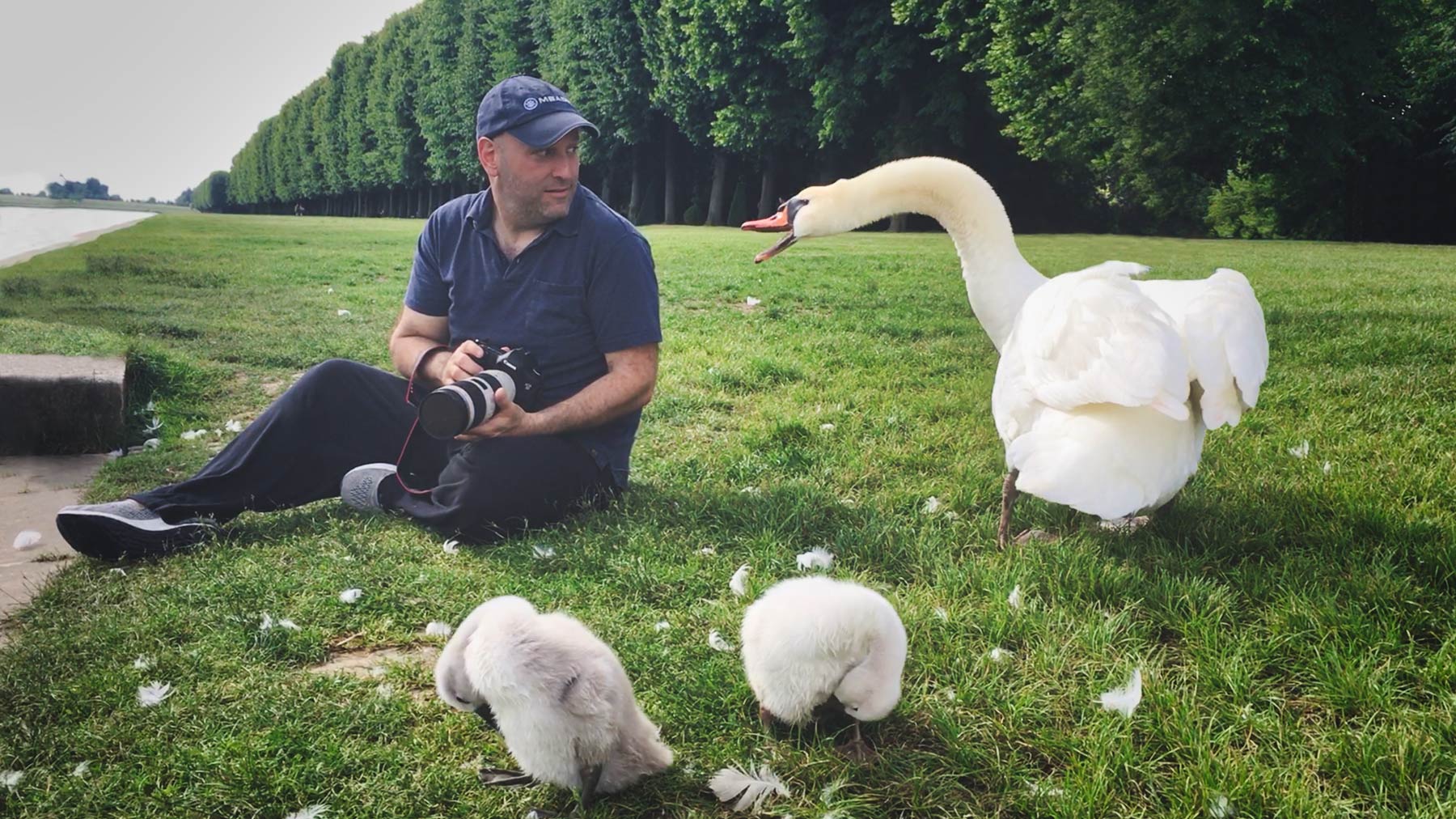 “GET AWAY FROM MY CYGNETS!”

She scared the crap out of me!  I jumped up and away as fast as I could and once I was away, mama swan simply returned to her young.  I am happy to say I escaped un-swan-scathed.  During the time we were there, an Asian family came over with their very young girl, one of the cutest kids we’ve ever seen.  She looked like she was right out of a Miyazaki movie.  This little lady was very curious about the swans.  The parents and grandparents were amazing with her.  Eventually, the swans returned to the water and the little girl wanted to follow them.  Holding her grandmother’s hand, they walked together along the canal and the little girl waved at people as she went by.  It was such a precious moment, and reminder of what’s important in life.  It was just another amazing experience there, to see a child in awe of the world and look back on our own lives.  It’s an overused cliché, but it really was a wonderful gift.  I wanted to remember it, so I kept the camera rolling and was able to get these screen captures.  I have no idea who the family is, but if you do, feel free to reach out to me via my contact page.  I’d love to credit them and send them the rest of the footage. 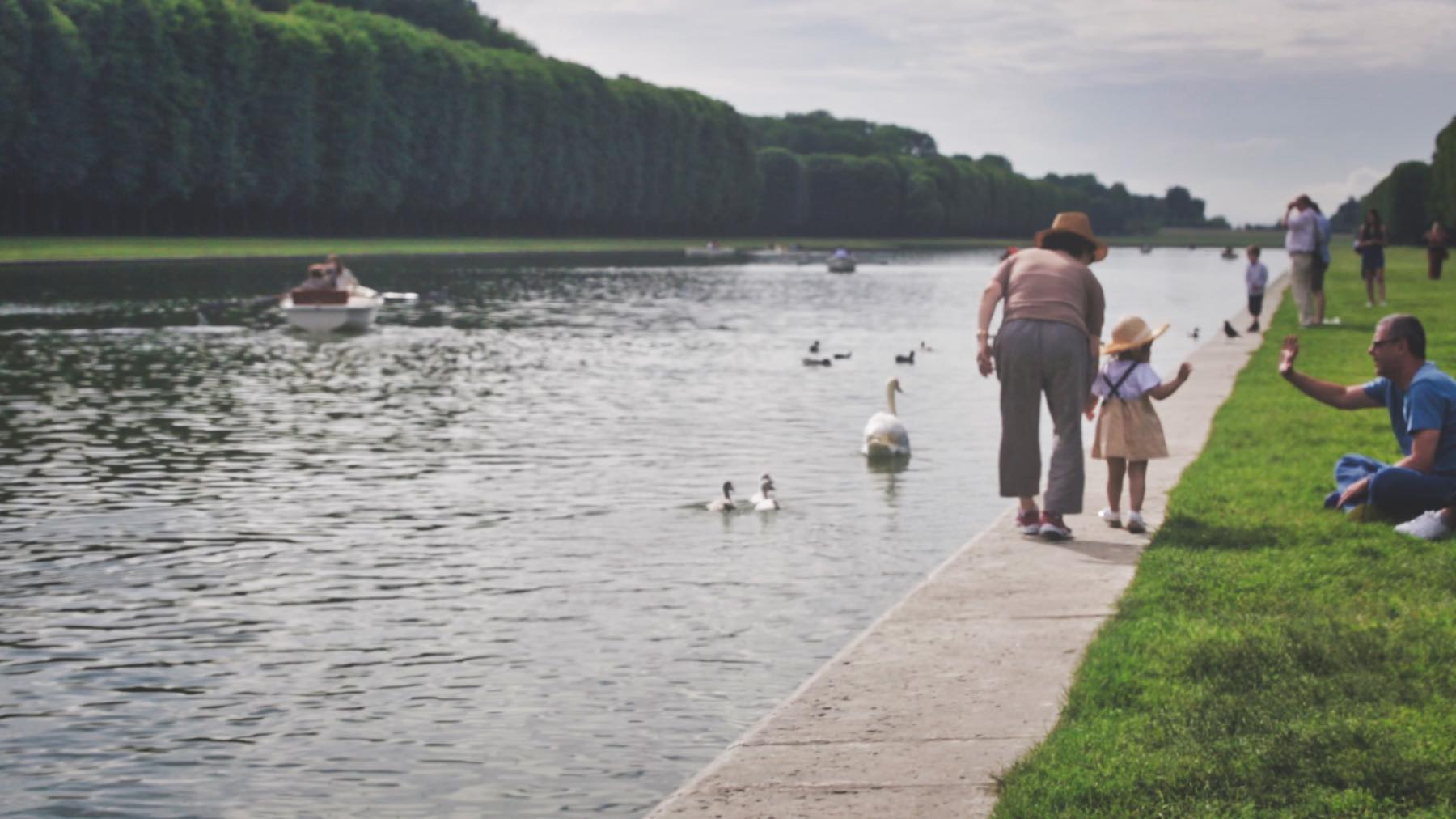 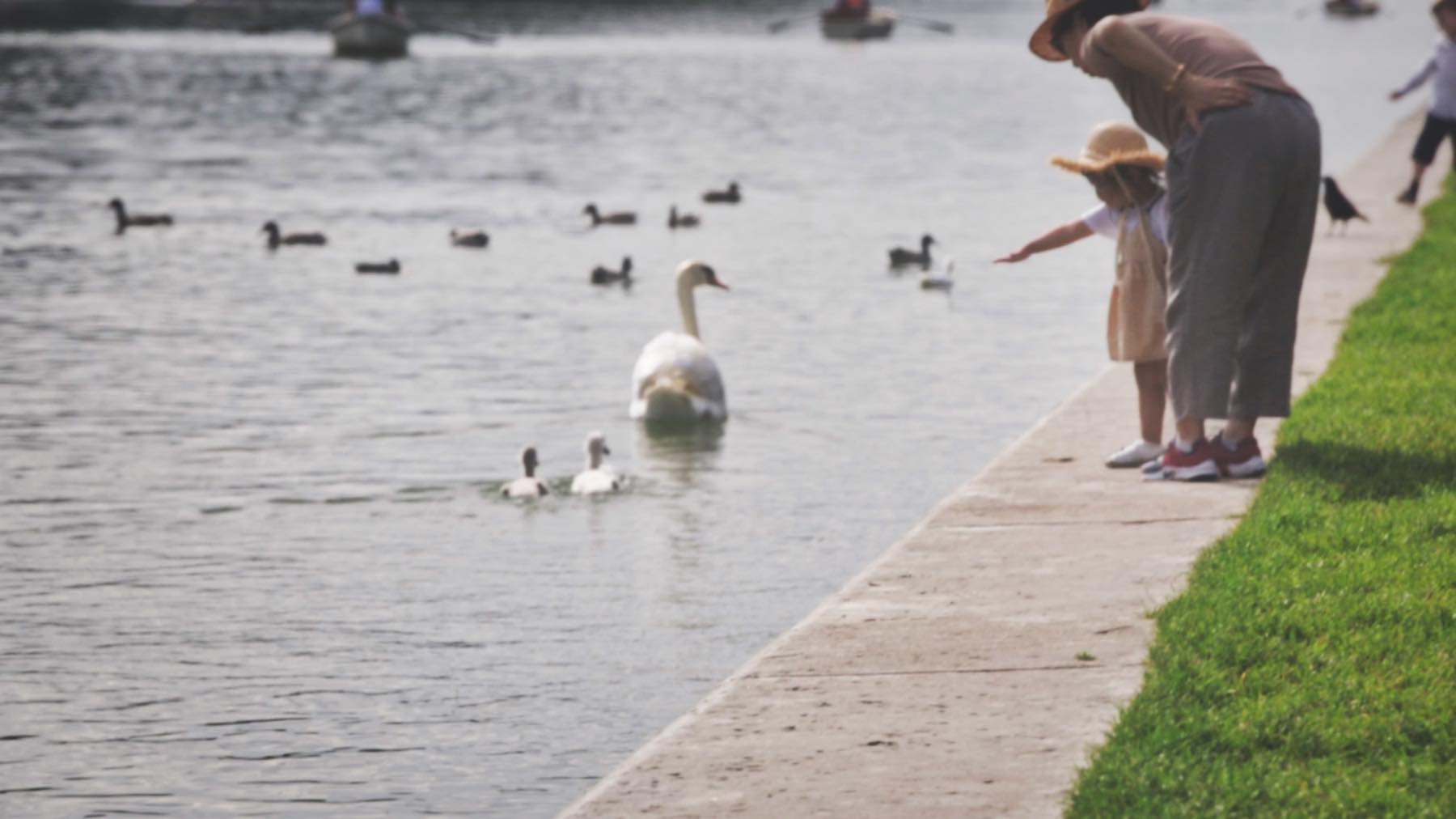 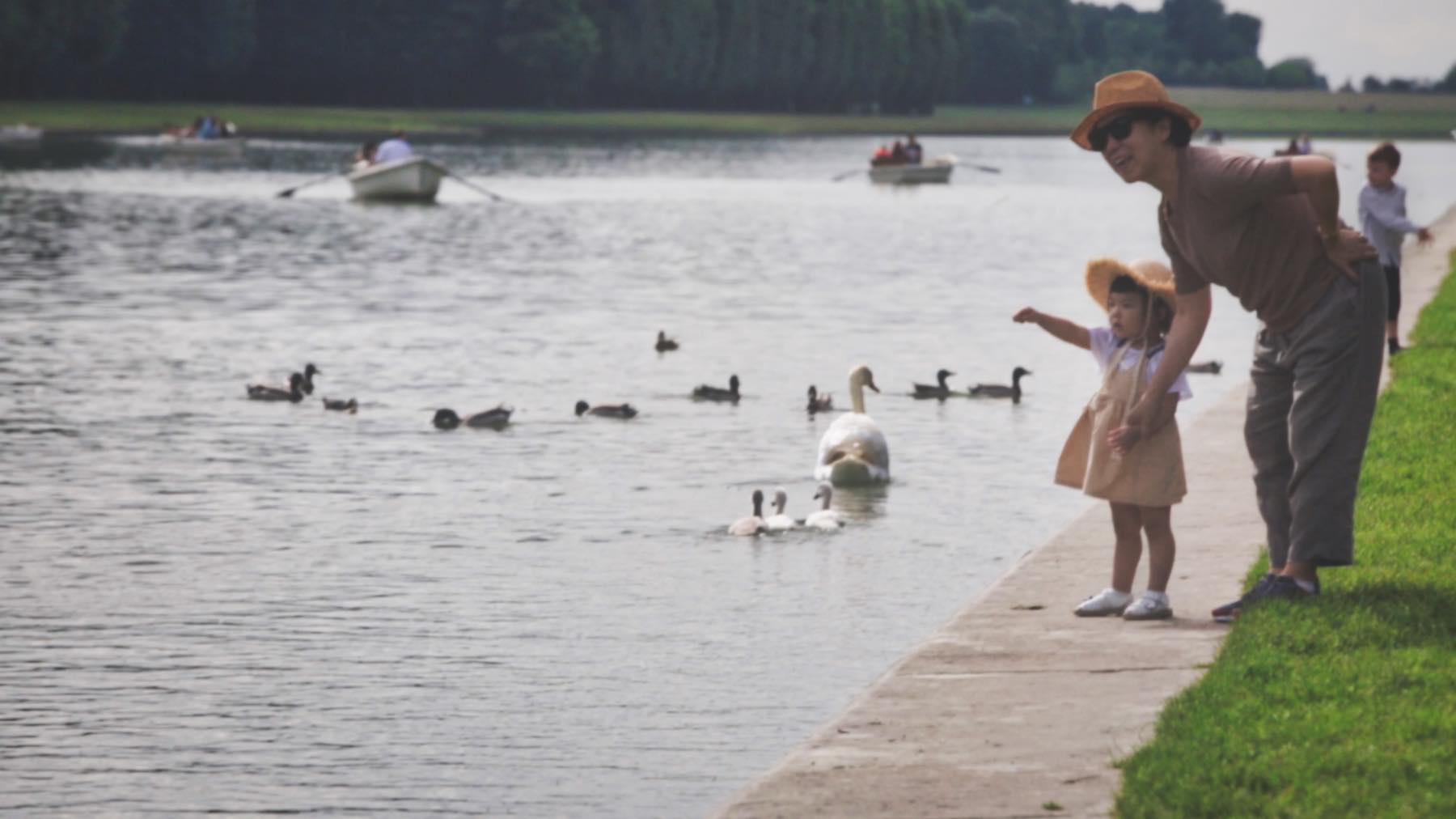 As I said before, Versailles is a place of wonder.  If you travel to France, I think it should be on your not-to-miss list.  Plan to be there all day and get an early start as there is so much to see and do.  And if you’re silly like us, when you’re on your way out, ask another tourist to take a photo of you just like this that you can frame when you get home.  Wait, do people frame photos anymore?  Scratch that.  A photo you can post on Facebook.  🙂 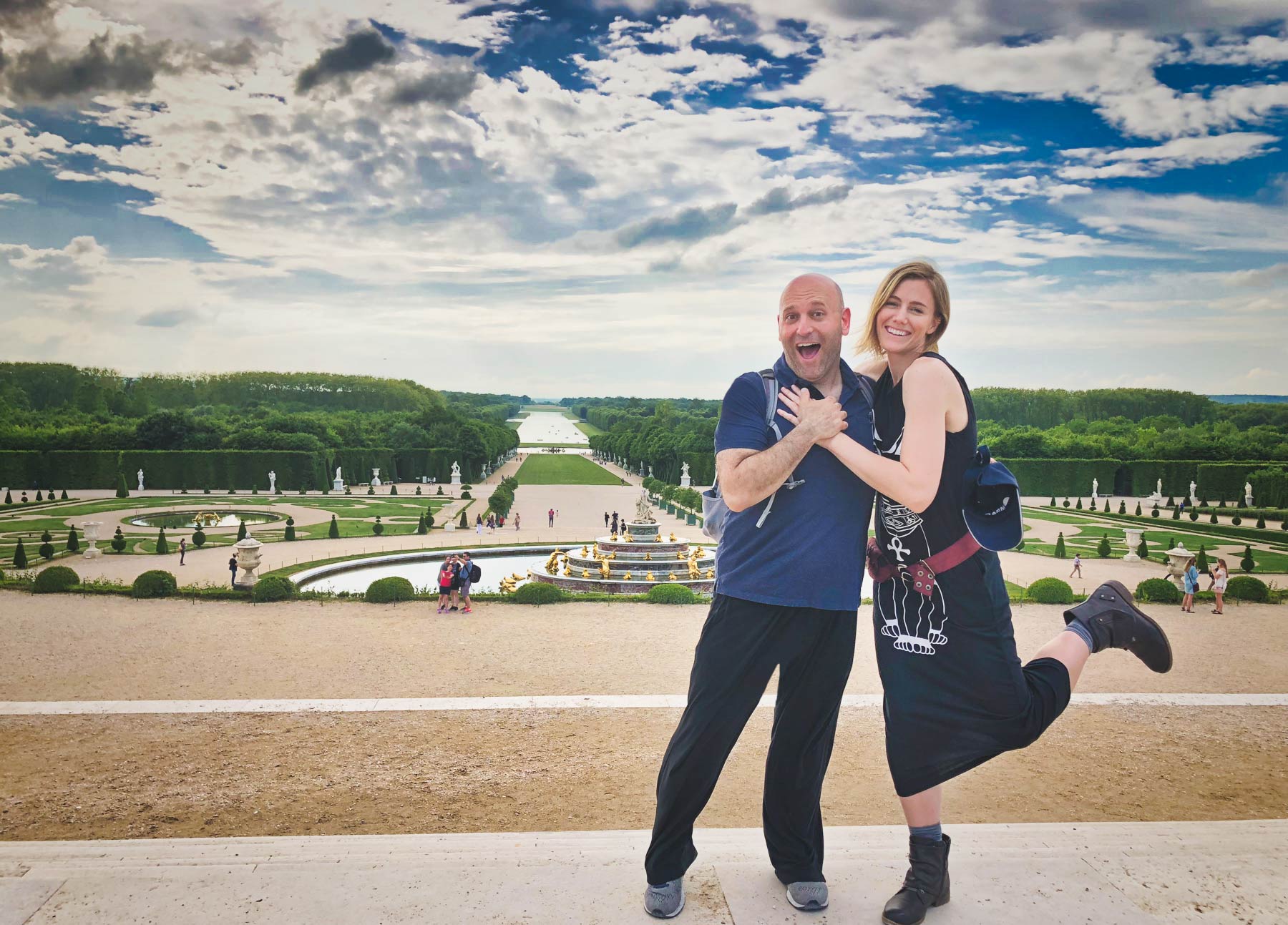 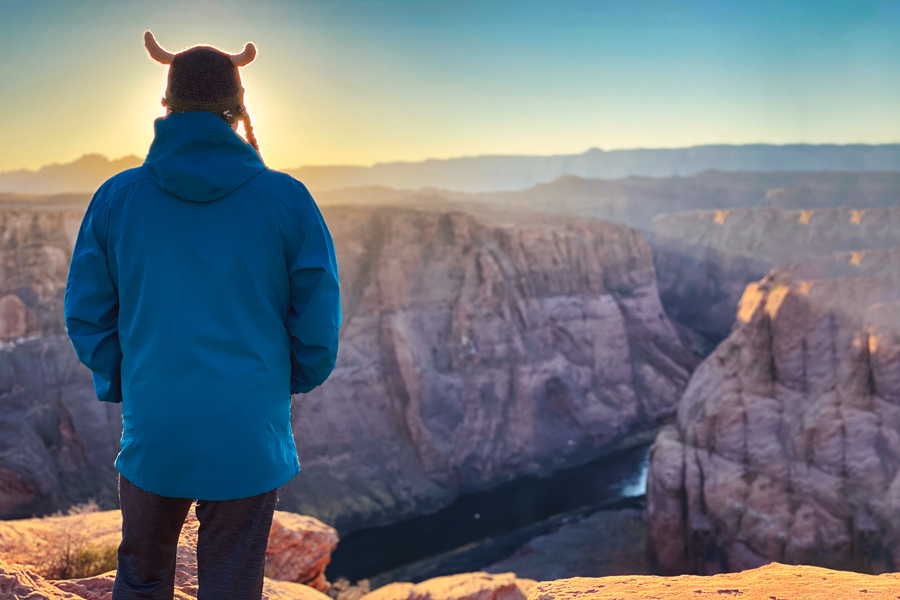